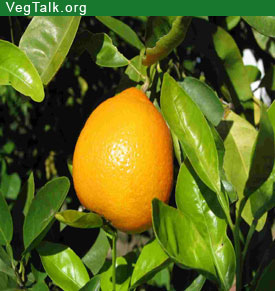 The orange is unknown in the wild state; is assumed to have originated in southern China, northeastern India, and perhaps southeastern Asia (formerly Indochina). It was carried to the Mediterranean area possibly by Italian traders after 1450 or by Portuguese navigators around 1500. Up to that era, citrus fruits were valued by Europeans mainly for medicinal purposes, but the orange was quickly adopted as a luscious fruit and wealthy persons grew it in private conservatories, called orangeries. By 1646 it had been much publicized and was well known.
Spaniards undoubtedly introduced the sweet orange into South America and Mexico in the mid-1500’s, and probably the French took it to Louisiana.
It was from New Orleans that seeds were obtained and distributed in Florida about 1872 and many orange groves were established by grafting the sweet orange onto sour orange rootstocks. Arizona received the orange tree with the founding of missions between 1707 and 1710. The orange was brought to San Diego, California, by those who built the first mission there in 1769. An orchard was planted at the San Gabriel Mission around 1804. A commercial orchard was established in 1841 on a site that is now a part of Los Angeles. In 1781, a surgeon and naturalist on the ship, Discovery, collected orange seeds in South Africa, grew seedlings on board and presented them to tribal chiefs in the Hawaiian Islands on arrival in 1792. In time, the orange became commonly grown throughout Hawaii, but was virtually abandoned after the advent of the Mediterranean fruit fly and the fruit is now imported from the United States mainland.
The orange has become the most commonly grown tree fruit in the world. It is an important crop in the Far East, the Union of South Africa, Australia, throughout the Mediterranean area, and subtropical areas of South America and the Caribbean. The United States leads in world production, with Florida, alone, having an annual yield of more than 200 million boxes, except when freezes occur which may reduce the crop by 20 or even 40%. California, Texas and Arizona follow in that order, with much lower production in Louisiana, Mississippi, Alabama and Georgia. Other major producers are Brazil, Spain, Japan, Mexico, Italy, India, Argentina and Egypt. In Brazil, oranges are grown everywhere in the coastal plain and in the highlands but most extensively in the States of Sao Paulo and Rio de Janeiro, where orange culture rose sharply in the years immediately following World War II and is still advancing. Mexico’s citrus industry is located largely in the 4 southern states of Nuevo Leon, Tamaulipas, San Luis Potosi and Veracruz. The orange crop is over one million MT and Nuevo Leon has 20 modern packing plants, mostly with fumigation facilities. Large quantities of fresh oranges and orange juice concentrate are exported to the United States and small shipments go to East Germany, Canada and Argentina. However, overproduction has glutted domestic markets and brought down prices and returns to the farmer to such an extent that plantings have declined and growers are switching to grapefruit. Cuba’s crop has become nearly 1/3 as large as that of Florida. Lesser quantities are produced in Puerto Rico, Central America (especially Guatemala), some of the Pacific Islands, New Zealand, and West Africa, where the fruit does not acquire an appealing color but is popular for its quality and sweetness. Many named cultivars have been introduced and grown in the Philippines since 1912, but the fruitis generally of low qualitybecause of the warm climate.

The orange tree, reaching 25 ft (7.5 m) or, with great age, up to 50 ft (15 m), has a rounded crown of slender branches. The twigs are twisted and angled when young and may bear slender, semi-flexible, bluntish spines in the leaf axils. There may be faint or conspicuous wings on the petioles of the aromatic, evergreen, alternate, elliptic to ovate, sometimes faintly toothed “leaves”–technically solitary leaflets of compound leaves. These are 2 1/2 to 6 in (6.5-15 cm) long, 1 to 3 3/4 in (2.5-9.5 cm) wide. Borne singly or in clusters of 2 to 6, the sweetly fragrant white flowers, about 2 in (5 cm) wide, have a saucer-shaped, 5-pointed calyx and 5 oblong, white petals, and 20 to 25 stamens with conspicuous yellow anthers. The fruit is globose, subglobose, oblate or somewhat oval, 2 1/2 to 3 3/4 in (6.5-9.5 cm) wide. Dotted with minute glands containing an essential oil, the outer rind (epicarp) is orange or yellow when ripe, the inner rind (mesocarp) is white, spongy and non-aromatic. The pulp (endocarp), yellow, orange or more or less red, consists of tightly packed membranous juice sacs enclosed in 10 to 14 wedge-shaped compartments which are readily separated as individual segments. In each segment there may be 2 to 4 irregular seeds, white externally and internally, though some types of oranges are seedless. The sweet orange differs physically from the sour orange in having a solid center.

Edible Parts: Flowers; Fruit.
Edible Uses: Condiment; Tea.
Fruit - raw. Sweet and delicious. The juice is often extracted from the fruit and sold as a refreshing and healthy drink or used in jellies, ice cream etc. The rind of the fruit is often used as a flavouring in cakes etc or made into marmalade. Flowers - cooked as a vegetable or made into a tea.

Appetizer; Blood purifier; Carminative; Miscellany; Skin; Tonic.
Citrus species contain a wide range of active ingredients and research is still underway in finding uses for them. They are rich in vitamin C, flavonoids, acids and volatile oils. They also contain coumarins such as bergapten which sensitizes the skin to sunlight. Bergapten is sometimes added to tanning preparations since it promotes pigmentation in the skin, though it can cause dermatitis or allergic responses in some people. Some of the plants more recent applications are as sources of anti-oxidants and chemical exfoliants in specialized cosmetics. The fruit is appetizer and blood purifier. It is used to allay thirst in people with fevers and also treats catarrh. The fruit juice is useful in the treatment of bilious affections and bilious diarrhoea. The fruit rind is carminative and tonic. The fresh rind is rubbed on the face as a cure for acne. The dried peel is used in the treatment of anorexia, colds, coughs etc.

Essential; Oil.
A semi-drying oil obtained from the seed is used in soap making. An essential oil from the peel is used as a food flavouring and also in perfumery and medicines.

In the past, oranges were primarily eaten fresh, out-of-hand, and many are so consumed in warm climates. In Cuba, oranges are peeled by an old-fashioned apple peeler mounted on the pushcart of fruit vendors. Today, pre-peeled oranges in plastic bags are sold to motorists by Latin American street vendors in Miami. The hand-labor of peeling oranges has limited the production of sliced oranges for use by restaurants and orange-salad packers. However, a peeling machine developed by John Webb in Clear-water, Florida, is peeling 80 oranges a minute and this device, together with his successful sectioning machine, is expected to greatly expand the commercial use of fresh oranges.
In the home, oranges are commonly peeled, segmented and utilized in fruit cups, salads, gelatins and numerous other desserts, and as garnishes on cakes, meats and poultry dishes. They were also squeezed daily in the kitchen for juice but housewives are becoming less and less inclined to do this. In South America, a dozen whole, peeled oranges are boiled in 3 pints (1.41 liters) of slightly sweetened water for 20 minutes and then strained and the liquid is poured over small squares of toast and slices of lemon and served as soup.
In the past few decades, the commercial extraction of orange juice and its marketing in waxed cartons or cans has become a major industry, though now surpassed on a grand scale by the production of frozen orange concentrate to be diluted with water and served as juice. Dehydrated orange juice (orange juice powder), developed in 1963, is sold for use in food manufacturing, adding flavor, color and nutritive elements to bakery goods and many other products. Whole oranges are sliced, dried and pulverized, and the powder is added to baked goods as flavoring.
Orange slices and orange peel are candied as confections. Grated peel is much used as a flavoring and the essential oil, expressed from the outer layer of the peel, is employed commercially as a food, soft-drink and candy flavor and for other purposes. Pectin for use in fruit preserves and otherwise, is derived from the white inner layer of the peel. Finisher pulp, consisting mostly of the juice sacs after the extraction of orange juice, has become a major by-product. Dried to a moisture content of less than 10%, it has many uses as an emulsifier and binder in the food and beverage industries.
Orange wine was at one time made in Florida from fruits too affected by cold spells to be marketed. It is presently produced on a small scale in South Africa. Orange wine and brandy are made in Brazil from fruits which have been processed for peel oil and then crushed.