St John’s wort (pronounced /ˈwɝt/, rhyming with hurt) used alone refers to the species Hypericum perforatum, also known as Tipton’s Weed or Klamath weed, but, with qualifiers, is used to refer to any species of the genus Hypericum. Therefore, H. perforatum is sometimes called Common St John’s wort to differentiate it. The species of Hypericum have been placed by some in the family Hypericaceae, but more recently have been included in the Clusiaceae.[citation needed] Approximately 370 species of the genus Hypericum exist worldwide with a native geographical distribution including temperate and subtropical regions of North America, Europe, Asia Minor, Russia, India and China.

Hypericum perforatum is a yellow-flowering, rhizomatous, perennial herb indigenous to Europe, which has been introduced to the Americas and grows wild in many meadows. The common name comes from its traditional flowering and harvesting on St John’s day, 24 June. The genus name Hypericum is derived from the Greek words hyper (above) and eikon (picture), in reference to the traditional use of the plant to ward off evil, by hanging plants over a picture in the house during St John’s day. The species name perforatum refers to the presence of small oil glands in the leaves that look like windows, which can be seen when they are held against the light.

Although Hypericum perforatum is grown commercially in some regions of south east Europe, it is listed as a noxious weed in more than twenty countries. In pastures, St John’s wort acts as both a toxic and invasive weed.[1] It replaces useful vegetation to the extent of making productive land unviable or acts as an alien species in natural ecosystems. Ingestion by livestock can cause photosensitization, central nervous system depression, spontaneous abortion, and can lead to death. Effective herbicides for control of Hypericum include 2,4-D, picloram, and glyphosate. In western North America three beetles Chrysolina quadrigemina, Chrysolina hyperici and Agrilus hyperici have been introduced as biocontrol agents.

St John’s wort can be visually recognized by leaf and flower type. Yellow, five petaled flowers approximately 20 mm across occur between late Spring and early to mid Summer. Leaves exhibit obvious translucent dots when held up to the light, giving them a ‘perforated’ appearance, hence the plant’s Latin name. When flowers or seed pods are crushed, a reddish/purple liquid is produced.

St John’s wort is a perennial plant with extensive, creeping rhizomes. Its stems are erect, branched in the upper section, and can grow to 1 m high. It has opposing, stalkless, narrow, oblong leaves which are 12 mm long or slightly larger. The leaves are yellow-green in color, with transparent dots throughout the tissue and occasionally with a few black dots on the lower surface. Its flowers measure up to 2.5 cm across, have five petals, and are colored bright yellow with conspicuous black dots. The flowers appear in broad cymes at the ends of the upper branches. The sepals are pointed, with glandular dots in the tissue. There are many stamens, which are united at the base into three bundles.

Some images of St John’s Wort 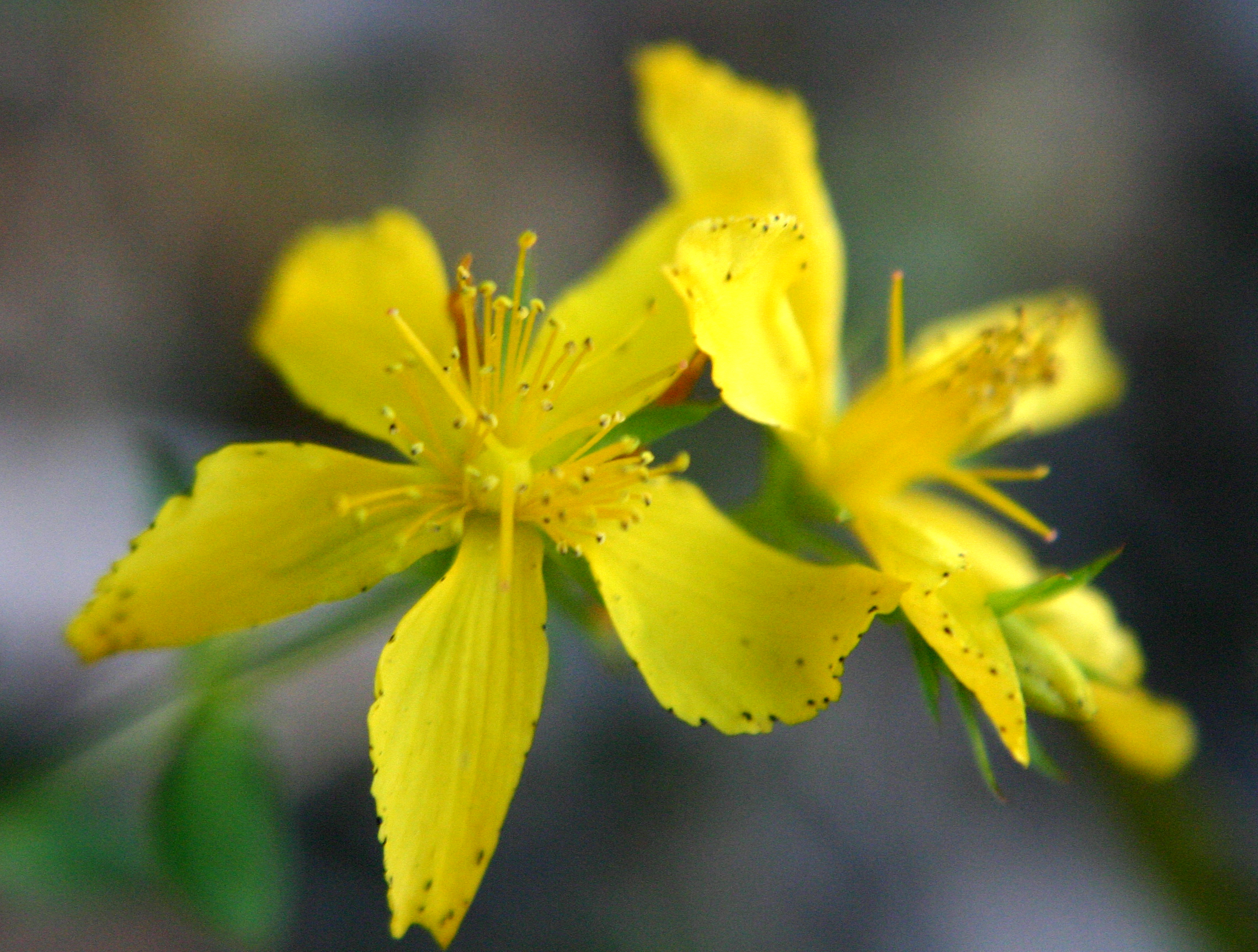 In the UK, St John’s Wort is sold as a herbal remedy for depression. Many women take it to remedy Pre-Menstrual Tension and “winter blues.”

It must be used with care, as it can interact with other medications, including birth-control pills.

In other EU contries, such as Ireland and Germany, a prescription anti-depressant is made from an extract of St John’s Wort. [Wikipedia]