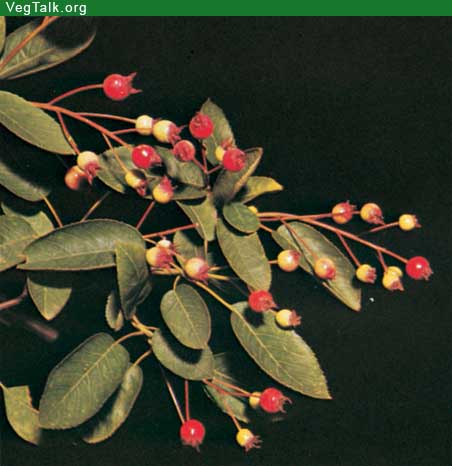 The Serviceberry (Amelanchier), also known as juneberry, mespilus, sarvis, shad-blossom and shadbush, is a genus of about 25 species of small deciduous trees and large shrubs in the family Rosaceae. In some areas an Amelanchier species is known as the currant-tree, but it is unrelated to currants (of genus Ribes). The genus has a wide distribution in the temperate Northern Hemisphere, with the majority of the species in North America and single species in Europe and Asia.
The name serviceberry comes from the similarity of the fruit to the related European Service Tree, Sorbus domestica, a name that in turn is derived via the French sorbier from the Latin name for the tree sorbus, recorded by Pliny the Elder. A widespread folk etymology states that plant’s flowering time signaled to early American pioneers that the ground had thawed enough in spring for the burial of the winter’s dead. The name Amelanchier is derived from the French name amelanche of the European serviceberry. The city name of Saskatoon in Saskatchewan comes from a Cree Indian name misaaskwatoomin for the juneberry.

How to choose a ripe and fresh Fruit
.
The fruit is a small pome, 1-2 cm diameter, blue-black, edible and often sweet, maturing in summer (whence the name ‘juneberry’).

Edible Parts: Fruit.
Edible fruit - raw or cooked. The fruit contains a few small seeds at the centre, it has a sweet flavour with a hint of apple. It can be eaten out of hand, used in pies, preserves etc or dried and used like raisins. We have found the fruit to be of variable quality, with some forms having a distinct bitterness in the flavour whilst others are sweet, juicy and delicious. When the fruit is thoroughly cooked in puddings or pies the seed imparts an almond flavour to the food. The fruit is rich in iron and copper. It is about 10mm in diameter. Trees can yield 7 to 15 tonnes per hectare.

Medicinal Uses
Anthelmintic; Disinfectant; Women’s complaints.
A tea made from the root bark (mixed with other unspecified herbs) was used as a tonic in the treatment of excessive menstrual bleeding and also to treat diarrhoea. A bath of the bark tea was used on children with worms. An infusion of the root was used to prevent miscarriage after an injury. A compound concoction of the inner bark was used as a disinfectant wash.
Other Uses
Hedge; Rootstock; Shelterbelt; Wood.
This species can be used as a dwarfing rootstock for Malus spp. (the apples) and Pyrus spp. (the pears). Plants can be grown as an informal hedge. Any trimming is best done after flowering. A fairly wind-tolerant species, it can be used to give protection from the wind as part of a mixed shelterbelt. Wood - hard, strong, close grained. Used for tool handles, small implements etc.

The fruit of several species are excellent to eat raw, tasting like a slightly nutty blueberry, though their popularity with birds makes harvesting difficult. Fruits of other species may be dry and tasteless. Fruit is harvested locally for pies and jams. Serviceberries are also very popular ornamental shrubs, grown for their flowers, bark, and fall color. All serviceberries need similar conditions to grow well, requiring good drainage, air circulation (to discourage leaf diseases), watering during drought and acceptable soil.

For campers out there! Not only those fruits are useful, their woods are also one… It is nice to use them on campfire

some information regarding serviceberry