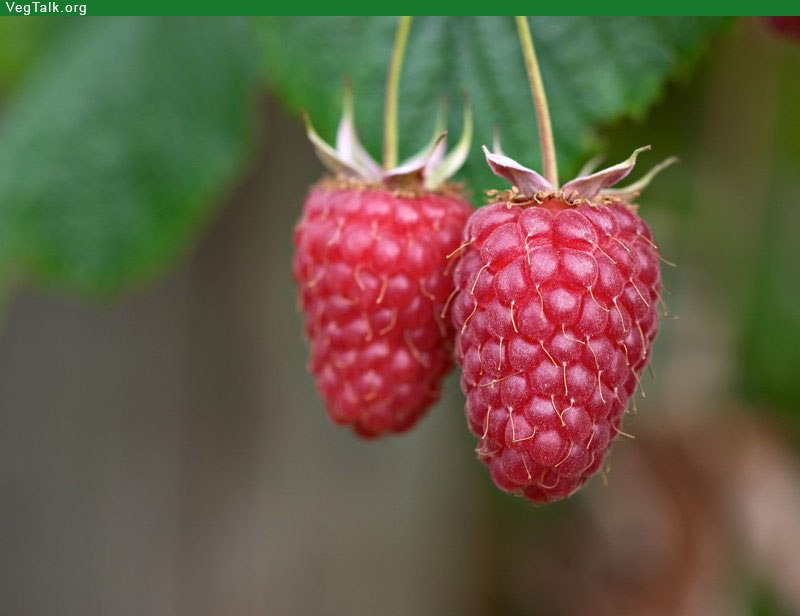 The Raspberry or Red Raspberry (Rubus idaeus) is a plant that produces a tart, sweet, red composite fruit in summer or early autumn. In proper botanical language, it is not a berry at all, but instead an aggregate fruit of numerous drupelets around a central core. In raspberry and other species of the subgenus Idaeobatus, the drupelets separate from the core when picked, leaving a hollow fruit, whereas in blackberry the drupelets stay attached to the core.
It typically grows in forest clearings or fields, particularly where fire or wood-cutting has produced open space for colonization by this opportunistic colonizer of disturbed soil. The raspberry flower can be a major nectar source for honeybees. As a cultivated plant in moist temperate regions, it is easy to grow and has a tendency to spread unless cut back.
Two types are commercially available: the wild-type summer bearing, that produces an abundance of fruit on second-year canes within a relatively short period in midsummer, and double- or “ever”-bearing plants, which also bear a few fruit on first-year canes in the autumn, as well as the summer crop on second-year canes. In the United States, raspberries can be cultivated from USDA plant hardiness zones 3 to 9.

In general, berries should be dry, firm, well shaped, and eaten within a week after purchase. If you can’t eat them that soon, remember that berries freeze well! It’s best to buy berries that are ‘in-season’ as they’ll cost less and are more ripe and flavorful than ‘out-of-season’ berries. Stay away from containers of berries with juice stains which may be a sign that the berries are crushed and possibly moldy; soft, watery fruit that means the berries are overripe; dehydrated, wrinkled fruit that means the berries have been stored too long.
Select raspberries that are unblemished and dry, in an unstained container. Raspberries should be medium to bright red, depending on the variety. Moisture will increase spoilage, so the berries themselves should be relatively dry. Shelf life for raspberries is short, and they should be consumed within 2–3 days of purchase. Eat at room temperature for fullest flavor.

Edible Parts: Fruit; Root; Stem.
Edible Uses: Coffee; Tea.
Fruit - raw or cooked. Delicious when eaten out of hand, the fruit is also used in pies, preserves etc. Root - cooked. The root, which should be neither too young nor too old, requires a lot of boiling. Young shoots - peeled and eaten raw or cooked like asparagus. They are harvested as they emerge through the ground in the spring and whilst they are still tender. A herb tea is made from the dried leaves. Another report says that a type of tea made from raspberry and blackberry leaves is an excellent coffee substitute.

Leaves of the raspberry cane are used fresh or dried in herbal and medicinal teas. The leaves have an astringent flavor and in herbal medicine are reputed to be effective in regulating menses. Leaves are found in groups of 3 or 5 and the undersides are silver-white in color. Blackberries have similar looking leaves but the undersides are green.
Raspberries contain significant amounts of polyphenol antioxidants, chemicals linked to promoting endothelial and cardiovascular health. Xylitol, a sugar alcohol alternative sweetener, can be extracted from raspberries
A purple to dull blue dye is obtained from the fruit. A fibre obtained from the stems is used in making paper. The stems are harvested in the summer after the fruit has been eaten, the leaves are removed and the stems are steamed until the fibres can be stripped. The fibres are cooked for 2 hours with lye and then hand beaten with mallets or ball milled for 3 hours. The paper is light brown in color. A decongestant face-mask made from the fruit is used cosmetically to soothe reddened skin

Recent breeding has resulted in varieties that are thornless and upright (do not require staking). Raspberries have also been crossed with other members of the Rubus genus, resulting in a number of hybrids, such as boysenberry and loganberry.
A gold raspberry, which is pale yellow, has been selected by horticulturists.
The black raspberry, also called a blackcap, is not the same plant, being a variety (usually) of Rubus occidentalis, a North American species. Other Rubus species also called raspberries include:
• Arctic raspberry (Rubus arcticus)
• Flowering raspberry (Rubus odoratus)
• Wine raspberry (Rubus phoenicolasius)
• Whitebark raspberry or Western Raspberry (Rubus leucodermis)
Not all of these are included in the same subgenus.