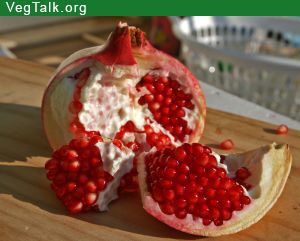 Origin: The pomegranate is native from Iran to the Himalayas in northern India and was cultivated and naturalized over the whole Mediterranean region since ancient times. It is widely cultivated throughout India and the drier parts of southeast Asia, Malaya, the East Indies and tropical Africa. The tree was introduced into California by Spanish settlers in 1769. In this country it is grown for its fruits mainly in the drier parts of California and Arizona.
Adaptation: Pomegranates prefer a semi-arid mild-temperate to subtropical climate and are naturally adapted to regions with cool winters and hot summers. A humid climate adversely affects the formation of fruit. The tree can be severely injured by temperatures below 12° F. In the U. S. pomegranates can be grown outside as far north as southern Utah and Washington, D.C. but seldom set fruit in these areas. The tree adapts well to container culture and will sometimes fruit in a greenhouse.
The pomegranate is a neat, rounded shrub or small tree that can grow to 20 or 30 ft., but more typically to 12 to 16 ft. in height. Dwarf varieties are also known. It is usually deciduous, but in certain areas the leaves will persist on the tree. The trunk is covered by a red-brown bark which later becomes gray. The branches are stiff, angular and often spiny. There is a strong tendency to sucker from the base. Pomegranates are also long-lived. There are specimens in Europe that are known to be over 200 years of age. The vigor of a pomegranate declines after about 15 years, however.

The fruits are ripe when they have developed a distinctive color and make a metallic sound when tapped. The fruits must be picked before over maturity when they tend to crack open, particularly when rained on. The pomegranate is equal to the apple in having a long storage life. It is best maintained at a temperature of 32° to 41° F. and can be kept for a period of 7 months within this temperature range and at 80 to 85% relative humidity without shrinking or spoiling. The fruits improve in storage, becoming juicier and more flavorful.
The fruit can be eaten out of hand by deeply scoring several times vertically and then breaking it apart. The clusters of juice sacs are then lifted out and eaten. The sacs also make an attractive garnish when sprinkled on various dishes. Pomegranate fruits are most often consumed as juice and can be juiced is several ways. The sacs can be removed and put through a basket press or the juice can be extracted by reaming the halved fruits on an ordinary orange juice squeezer. Another approach starts with warming the fruit slightly and rolling it between the hands to soften the interior. A hole is then cut in the stem end which is placed on a glass to let the juice run out, squeezing the fruit from time to time to get all the juice. The juice can be used in a variety of of ways: as a fresh juice, to make jellies, sorbets or cold or hot sauces as well as to flavor cakes, baked apples, etc. Pomegranate syrup is sold commercially as grenadine. The juice can also be made into a wine.

Edible Uses
Edible Parts: Fruit; Leaves; Seed.
Edible Uses: Condiment.
Fruit - raw. Juicy and refreshing with a sub-acid flavour, they are considered delicious by many people though others do not like the large number of seeds with relatively little fruit pulp. The fruit juice can be used in soups, sauces, jellies, ice cream, cakes etc. The fruit contains about 1.5% protein, 1.6% fat, 16.8% carbohydrate, 0.6% ash. Annual yields from wild trees in the Himalayas averaged 32kg per tree. The fruit is about 12cm in diameter. The fresh seed is soft and can be eaten raw. When dried it is used as a seasoning in dal, fried samosa, stuffings and chutneys. The boiled leaves are said to be eaten.

Medicinal Uses
Antibacterial; Antiviral; Astringent; Cardiac; Demulcent; Emmenagogue; Refrigerant; Stomachic; Vermifuge.
The pomegranate has a long history of herbal use dating back more than 3,000 years. All parts of the plant contain unusual alkaloids, known as ‘pelletierines’, which paralyse tapeworms so that they are easily expelled from the body by using a laxative. The plant is also rich in tannin, which makes it an effective astringent. It is used externally in the treatment of vaginal discharges, mouth sores and throat infections. The whole plant, but in particular the bark, is antibacterial, antiviral and astringent. This remedy should be used with caution, overdoses can be toxic. The flowers are used in the treatment of dysentery, stomach ache and cough. Along with the leaves and seeds, they have been used to remove worms. The seeds are demulcent and stomachic. The fruit is a mild astringent and refrigerant in some fevers and especially in biliousness. It is also cardiac and stomachic. The dried rind of the fruit is used in the treatment of amoebic dysentery, diarrhoea etc. It is a specific remedy for tapeworm infestation. The stem bark is emmenagogue. Both the stem and the root barks are used to expel tapeworms. Use this with caution, the root bark can cause serious poisoning.The bark is harvested in the autumn and dried for later use. The dried pericarp is decocted with other herbs and used in the treatment of colic, dysentery, leucorrhoea etc.

List of all varieties of the fruit, with an image and brief gustatory qualities and description.
The name “pomegranate” derives from Latin pomum (“apple”) and granatus (“seeded”). This has influenced the common name for pomegranate in many languages (e.g. German Granatapfel, seeded apple). The genus name Punica is named for the Phoenicians, who were active in broadening its cultivation, partly for religious reasons; consequently in classical Latin the fruit’s name was malum punicum or malum granatum, where “malum” was broadly applied to many apple-like fruits. A separate, widespread root for “pomegranate” is the Egyptian and Semitic rmn. Attested in Ancient Egyptian, in Hebrew rimmôn, and in Arabic rummân, this root was brought by Arabic to a number of languages, including Portuguese (romã) , and Kabyle rrumman and Maltese “rumen”.
According to the OED, the weapon grenade derived its name, attested in 1532, from the French name for the fruit, which is la grenade (from which also comes the name applied to a kind of syrup, originally pomegranate syrup, widely used in cocktails and grenadine).
Even though this fruit does not originate from China, one common nickname is “Chinese apple”

After opening the pomegranate by scoring it with a knife and breaking it open, the arils (seed casings) are separated from the skin (peel) and internal white supporting structures (pith and carpellary membrane). Separating the red arils can be simplified by performing this task in a bowl of water, whereby the arils will sink and the white structures will float to the top. The entire seed is consumed raw, though the fleshy outer portion of the seed is the part that is desired. The taste differs depending on the variety of pomegranate and its state of ripeness. It can be very sweet or it can be very sour or tangy, but most fruits lie somewhere in between, which is the characteristic taste, laced with notes of its tannin.
Pomegranate juice is a popular drink in the Middle East, and is also used in Iranian and Indian cuisine; it began to be widely marketed in the US in 2004. Pomegranate concentrate is used in Syrian cuisine. Grenadine syrup is thickened and sweetened pomegranate juice; it is used in cocktail mixing. Before the tomato arrived in the Middle East, grenadine was widely used in many Persian foods; it can still be found in traditional recipes.
Wild pomegranate seeds are sometimes used as a spice, known as anardana (which literally means pomegranate (anar) seeds (dana) in Persian), most notably in Indian and Pakistani cuisine but also as a replacement for pomegranate syrup in Persian and Middle Eastern cuisine. As a result of this, the dried whole seeds can often be obtained in ethnic markets. The seeds are separated from the flesh, dried for 10–15 days and used as an acidic agent for chutney and curry production. The seeds may also be ground in order to avoid seeds becoming stuck in the teeth when eating dishes prepared with them. The seeds of the wild pomegranate daru from the Himalayas is considered the highest quality source for this spice.
In Turkey, Armenia and Azerbaijan, pomegranate (Turkish: nar; Azerbaijani: nar; Armenian: nur) is used in a variety of ways, notably as pomegranate juice. In Turkey pomegranate sauce, (Turkish: nar ekşisi) is used as a salad dressing, to marinate meat, or simply to drink straight. Pomegranate seeds are also used in salads, in Muhammara (Turkish Walnut Garlic Spread) and in Güllaç, a famous Turkish dessert. In Azerbaijan and Armenia, pomegranate is also used to make high-quality wine which is successfully exported to other countries.
In Greece, pomegranate (Greek: ροδι, rodi) is used in many recipes; such as kollivozoumi, a creamy broth made from boiled wheat, pomegranates and raisins; legume salad with wheat and pomegranate; traditional Middle Eastern lamb kabobs with pomegranate glaze; pomegranate eggplant relish; avocado and pomegranate dip; are just some of the dishes it is used in culinary. Pomegranate is also made into a liqueur and popular fruit confectionery that can be used as ice cream topping, or mixed with yogurt, and even spread as jams over toast for breakfast.