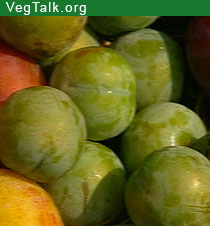 A plum or gage is a stone fruit tree in the genus Prunus, subgenus Prunus. The subgenus is distinguished from other subgenera (peaches, cherries, bird cherries, etc) in the shoots having a terminal bud and the side buds solitary (not clustered), the flowers being grouped 1-5 together on short stems, and the fruit having a groove running down one side, and a smooth stone.
A prune is a dried fruit of various plum species, mostly Prunus domestica. It is wrinkly in shape, unlike its non-dried counterpart. More than 125 cultivars of plums are grown for drying. Four of the most common cultivars are French, Imperial, Italian, and Greengage. In general, prunes are freestone cultivars (the stone is easy to remove), whereas most other plums grown for fresh consumption are cling (the stone is more difficult to remove). Fresh prunes reach the market earlier than fresh plums and are usually smaller in size.
Prune juice is richer in fiber than plum juice and is often marketed as a treatment for constipation, and it helps with kidney stones. In the United States, an effort to rebrand “prunes” as “dried plums” began in 2000, to appeal to a younger market who associated prunes with elderly people. However, only some varieties of plum are usually called prunes when dried; others have usually been called “dried plums” in any case.

Plums come in a wide variety of colours and sizes. Some are much firmer-fleshed than others and some have yellow, white, green or red flesh, with equally varying skin colour.

Edible Parts: Flowers; Fruit; Seed.
Edible Uses: Gum; Oil; Tea.
Fruit - raw or cooked. The fruit varies considerably from cultivar to cultivar, but it is generally somewhat mealy, soft and juicy with a delicious flavour ranging from very sweet to acid. The more acid fruits are usually only used for cooking purposes. The fruit varies widely in size according to cultivar but can be 8cm long and contains a single large seed. Seed - raw or cooked. Do not eat the seed if it is too bitter - see the notes above on toxicity. An edible gum is obtained from points of damage on the trunk. The seed contains about 20% of an edible semi-drying oil. It has an agreeable almond smell and flavour. The flowers are eaten. They are used as a garnish for salads and ice cream or brewed into a tea.

Febrifuge; Laxative; Stomachic.
The dried fruit, known as prunes, is a safe and effective laxative and is also stomachic. The bark is sometimes used as a febrifuge. Although no specific mention has been seen for this species, all members of the genus contain amygdalin and prunasin, substances which break down in water to form hydrocyanic acid (cyanide or prussic acid). In small amounts this exceedingly poisonous compound stimulates respiration, improves digestion and gives a sense of well-being.

Plum fruit is sweet and juicy and it can be eaten fresh or used in jam-making or other recipes. Plum juice can be fermented into plum wine; when distilled, this produces a brandy known in Eastern Europe as Slivovitz. Dried plums are known as prunes. Prunes are sweet and juicy. They also contain several antioxidants.
Prune marketers in the United States have, in recent years, begun marketing their product as “dried plums”, because “prune” has negative connotations connected with elderly people suffering from constipation.
Various flavours of dried plum are available in Southeast Asia and specialty stores worldwide. They tend to be much drier than the standard prune. Cream, Ginsing, Spicy, and Salty are among the common variety flavours. Licorice is generally used to intensify the flavour of these plums and is used to make salty plum drinks and toppings for Shaved Ice or baobing.