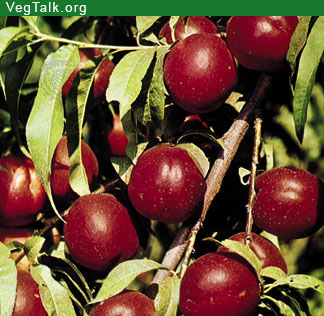 The Peach (Prunus persica) is a tree native to China that bears a juicy fruit of the same name.
It is a deciduous tree growing to 5–10 m tall, belonging to the subfamily Prunoideae of the family Rosaceae. It is classified with the almond in the subgenus Amygdalus within the genus Prunus, distinguished from the other subgenera by the corrugated seed shell.
The leaves are lanceolate, 7–15 cm long and 2–3 cm broad. The flowers are produced in early spring before the leaves; they are solitary or paired, 2.5–3 cm diameter, pink, with five petals. The fruit is a drupe, with a single large seed encased in hard wood (called the “stone” or “pit”), yellow or whitish flesh, a delicate aroma, and a velvety skin that bruises easily. The seed is red, oval shaped and 1.5-2 cm thick. Peaches, along with cherries, plums and apricots, are stone fruits (drupes).
The scientific name persica derives from an early European belief that peaches were native to Persia (now Iran). The modern botanical consensus is that they originate in China, and were introduced to Persia and the Mediterranean region along the Silk Road in early historical times, probably by about 2000 BC (Huxley et al. 1992).
Cultivated peaches are divided into “freestone” and “clingstone” cultivars, depending on whether the flesh sticks to the stone or not; both kinds can have either white or yellow flesh. Peaches with white flesh typically are very sweet with little acidity, while yellow-fleshed peaches typically have an acidic tang coupled with sweetness, though this also varies greatly. Both colours often have some red on their skin. Low-acid white-fleshed peaches are the most popular kinds in China, Japan, and neighbouring Asian countries, while Europeans and North Americans have historically favoured the acidic, yellow-fleshed kinds.

Edible Parts: Flowers; Fruit; Seed.
Edible Uses: Gum; Oil; Tea.
Fruit - raw, cooked or dried for later use. The fruit is often used in ice creams, pies, jams etc[183]. When fully ripe, the fruit of the best forms are very juicy with a rich delicious flavour. Wild trees in the Himalayas yield about 36.5kg of fruit a year. The fruit of the wild form contains about 5.2% sugars, 2% protein, 1.6% ash. Vitamin C content is 2.3mg per 100g. The fruit is a good source of vitamin A. Fruits of the wild peach are richer in nutrients than the cultivated forms. The size of fruit varies widely between cultivars and the wild form, it can be up to 7cm in diameter and contains one seed. Flowers - raw or cooked. Added to salads or used as a garnish. They can also be brewed into a tea. The distilled flowers yield a white liquid which can be used to impart a flavour resembling the seed. Seed - raw or cooked. Do not eat if it is too bitter, seed can contain high concentrations of hydrocyanic acid. See the notes above on toxicity. A semi-drying oil is obtained from the seed. Although the report does not mention edibility it can be assumed that it is edible. The seed contains up to 45% oil. A gum is obtained from the stem. It can be used for chewing.

The fruits are eaten by the people in the villages. A comparison of their chemical composition with that of the superior cultivated types given in Appendix 11 reveals that these wild peaches are richer in nutrients than the improved cultivated varieties. Trials should be conducted for their evaluation for processing purposes. Considering their overall fruit quality, they should make a good canned product.
The late-ripening characteristic of this wild peach is unique. This plant can be used as one of the parents in the hybridization programme for evolving some late-ripening peach variety. A peach variety ripening after the monsoons shall be a boon to the Himachali peach-growers as all the varieties recommended at present ripen during the peak monsoon period. Owing to heavy rains, the roads are often blocked and this blockage hampers the transportation of peaches. The keeping quality of the late-ripening peach shall also be better owing to the cold weather prevailing at that time.
The seeds of this wild peach are collected and sown for use as a rootstock. An oil is obtained from the kernels of this plant. This oil resembles the oil from bitter almonds, for which it may be substituted