Abelmoschus esculentus, commonly known as okra or lady’s finger, is a flowering plant valued for its edible green fruits. The name okra is of West African origin and is cognate with “ókùrù” in Igbo, a language spoken in what is now known as Nigeria. The species is occasionally referred to by an early, now incorrect synonym, Hibiscus esculentus L.
The species is an annual or perennial, growing to 2 m tall. The leaves are 10–20 cm long and broad, palmately lobed with 5–7 lobes. The flowers are 4–8 cm diameter, with five white to yellow petals, often with a red or purple spot at the base of each petal. The fruit is a capsule, 5–20 cm long, containing numerous seeds.

What is the edible part, how to cut or clean the fruit.
Edible Parts: Fruit; Leaves; Root; Seed.
Edible Uses: Coffee; Oil; Pectin.
Immature fruit - cooked on their own or added to soups etc. They can be used fresh or dried. Mucilaginous, they are commonly used as a thickening for soups, stews and sauces. The fruits are rich in pectin and are also a fair source of iron and calcium. The fresh fruits contain 740 iu vitamin A. The fruit should be harvested whilst young, older fruits soon become fibrous. The fruit can be up to 20cm long. Seed - cooked or ground into a meal and used in making bread or made into ‘tofu’ or ‘tempeh’. The roasted seed is a coffee substitute. Probably the best of the coffee substitutes. The seed contains up to 22% of an edible oil. The leaves, flower buds, flowers and calyces can be eaten cooked as greens. The leaves can be dried, crushed into a powder and stored for later use. They are also used as a flavouring. Root - it is edible but very fibrous. Mucilaginous, without very much flavour.

Medicinal Uses
Antispasmodic; Demulcent; Diaphoretic; Diuretic; Emollient; Stimulant; Vulnerary.
The roots are very rich in mucilage, having a strongly demulcent action. They are said by some to be better than marsh mallow (Althaea officinalis). This mucilage can be used as a plasma replacement. An infusion of the roots is used in the treatment of syphilis. The juice of the roots is used externally in Nepal to treat cuts, wounds and boils. The leaves furnish an emollient poultice. A decoction of the immature capsules is demulcent, diuretic and emollient. It is used in the treatment of catarrhal infections, ardor urinae, dysuria and gonorrhoea. The seeds are antispasmodic, cordial and stimulant. An infusion of the roasted seeds has sudorific properties.

Other Uses
Fibre; Paper; Size.
A fibre obtained from the stems is used as a substitute for jute. It is also used in making paper and textiles. The fibres are about 2.4mm long. When used for paper the stems are harvested in late summer or autumn after the edible seedpods have been harvested, the leaves are removed and the stems are steamed until the fibres can be stripped off. The fibres are cooked for 2 hours with lye and then put in a ball mill for 3 hours. The paper is cream coloured. A decoction of the root or of the seeds is used as a size for paper.

Abelmoschus esculentus is cultivated throughout the tropical and warm temperate regions of the world for its fibrous fruits containing round, white seeds. The fruits are harvested when immature and eaten as a vegetable.
In Iran, Egypt, Lebanon, Israel, Jordan, Iraq, Greece, Turkey and other parts of the eastern Mediterranean, okra is widely used in a thick stew made with vegetables and meat. In Indian cooking, it is sauteed or added to gravy-based preparations and is very popular in South India. It became a popular vegetable in Japanese cuisine towards the end of the 20th century, served with soy sauce and katsuobushi or as tempura. It is used as a thickening agent in Charleston gumbo. Breaded, deep fried okra is served in the southern United States. The fruits may be pickled.
The leaves of Abelmoschus esculentus are eaten raw in salads, or cooked as a vegetable. 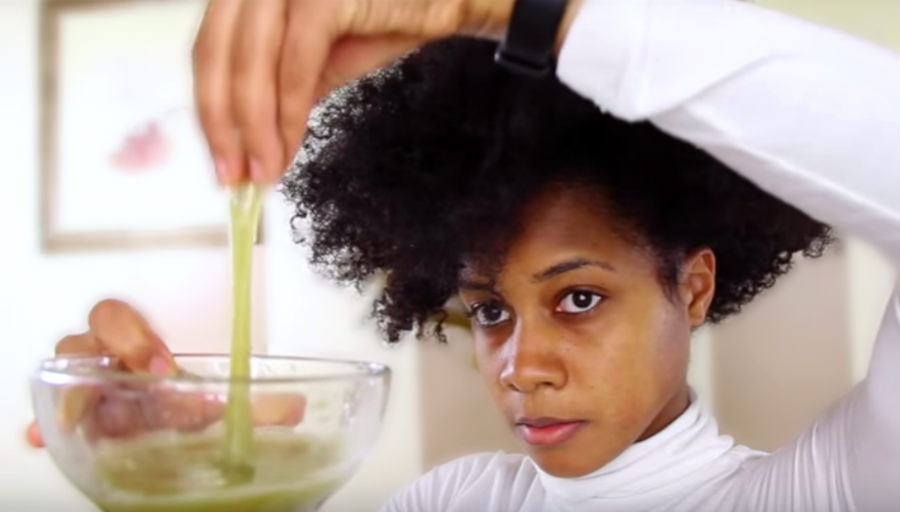 Welp, looks like I just ate some hair gel!

Yep, that’s what okra is like boiled and blended. I think it has a mild asparagus flavor, and it’s pretty good stirred together with a blended lentil soup (even without added spices, or was that a mud face mask I ate)…