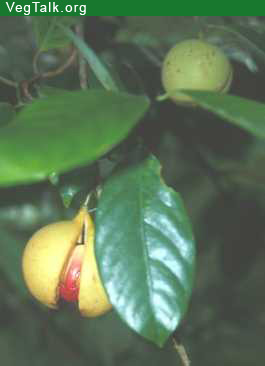 The nutmegs Myristica are a genus of evergreen trees indigenous to tropical southeast Asia and Australasia. They are important for two spices derived from the fruit, nutmeg and mace.
Mace within nutmeg fruit
Nutmeg is the actual seed of the tree, roughly egg-shaped and about 20–30 mm long and 15–18 mm wide, and weighing between 5 and 10 grams dried, while mace is the dried “lacy” reddish covering or arillus of the seed.
Several other commercial products are also produced from the trees, including essential oils, extracted oleoresins, and nutmeg butter (see below).
The pericarp (fruit/pod) is used in Grenada to make a jam called Morne Delice. In Indonesia, the fruit is sliced finely, cooked and crystallised to make a fragrant candy called manisan pala (“nutmeg sweets”).
The most important species commercially is the Common or Fragrant Nutmeg Myristica fragrans, native to the Banda Islands of Indonesia; it is also grown in the Caribbean, especially in Grenada. Other species include Papuan Nutmeg M. argentea from New Guinea, and Bombay Nutmeg M. malabarica from India; both are used as adulterants of M. fragrans products.

The fruit is oval or pyriform about 2 inches long, and consists of an outer fleshy husk and inner seed. The husk splits when ripe, exposing the seed. Immediately surrounding the seed coat is a crimson network of tissue, the mace. The mace is rather leathery in texture. Nutmeg is the inner seed or kernel. Both nutmeg and mace are used mainly as spices. The distinctive flavors are due to volatile oils, present in both tissues. The oil of nutmeg, used as a nutmeg butter, is obtained by crushing and pressing the seed.

Risks and toxicity
In low doses, nutmeg produces no noticeable physiological or neurological response. Large doses of 30 g or more are dangerous, potentially inducing convulsions, palpitations, nausea, eventual dehydration, and generalized body pain. In amounts of 5–20 g it is a mild to medium hallucinogen, producing visual distortions and a mild euphoria. It is a common misconception that nutmeg contains monoamine oxidase inhibitors (MAOIs). This is untrue; nutmeg should not be taken in combination with MAOIs but it does not contain them . A test was carried out on the substance which showed that, when ingested in large amounts, nutmeg takes on a similar chemical make-up to MDMA (ecstasy). However, use of nutmeg as a recreational drug is unpopular due to its unpleasant taste and its side effects, including dizziness, flushes, dry mouth, accelerated heartbeat, temporary constipation, difficulty in urination, nausea, and panic. A user will not experience a peak until approximately six hours after ingestion, and effects can linger for up to three days afterwards.
A risk in any large-quantity (over 25 g) ingestion of nutmeg is the onset of ‘nutmeg poisoning’, an acute psychiatric disorder marked by thought disorder, a sense of impending death, and agitation. Some cases have resulted in hospitalization.

Nutmeg and mace have similar taste qualities, nutmeg having a slightly sweeter and mace a more delicate flavor. Mace is often preferred in light-coloured dishes for the bright orange, saffron-like colour it imparts. Nutmeg is nice in cheese sauces and is best grated fresh (see nutmeg grater).

Japanese varieties of curry powder include nutmeg as an ingredient.
Nutmeg is a traditional ingredient in mulled cider, mulled wine, and eggnog.
Nutmeg butter is obtained from the nut by expression. It is semi solid and reddish brown in colour and tastes and smells of nutmeg. Approximately 75% (by weight) of nutmeg butter is trimyristin which can be turned into myristic acid, a 14-carbon fatty acid which can be used as replacement for cocoa butter, can be mixed with other fats like cottonseed oil or palm oil, and has applications as an industrial lubricant.