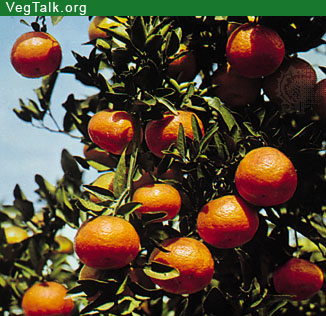 The mandarin orange is considered a native of south-eastern Asia and the Philippines. It is most abundantly grown in Japan, southern China, India, and the East Indies, and is esteemed for home consumption in Australia. It gravitated to the western world by small steps taken by individuals interested in certain cultivars. Therefore, the history of its spread can be roughly traced in the chronology of separate introductions. Two varieties from Canton were taken to England in 1805. They were adopted into cultivation in the Mediterranean area and, by 1850, were well established in Italy. Sometime between 1840 and 1850, the ‘Willow-leaf’ or ‘China Mandarin’ was imported by the Italian Consul and planted at the Consulate in New Orleans. It was carried from there to Florida and later reached California. The ‘Owari’ Satsuma arrived from Japan, first in 1876 and next in 1878, and nearly a million budded trees from 1908 to 1911 for planting in the Gulf States. Six fruits of the ‘King’ mandarin were sent from Saigon in 1882 to a Dr. Magee at Riverside, California. The latter sent 2 seedlings to Winter Park, Florida. Seeds of the ‘Oneco’ mandarin were obtained from India by the nurseryman, P.W. Reasoner, in 1888. In 1892 or 1893, 2 fruits of ‘Ponkan’ were sent from China to J.C. Barrington of McMeskin, Florida, and seedlings from there were distributed and led to commercial propagation.
The commercial cultivation of mandarin oranges in the United States has developed mostly in Alabama, Florida and Mississippi and, to a lesser extent, in Texas, Georgia and California. Mexico has overproduced tangerines, resulting in low market value and cessation of plantings. The 1971-72 crop was 170,000 MT, of which, 8,600 MT were exported to the United States and lesser amounts to East Germany, Canada and Argentina. There is limited culture in Guatemala and some other areas of tropical America. These fruits have never been as popular in western countries as they are in the Orient, Coorg, a mountainous region of the Western Ghats, in India, is famous for its mandarin oranges. For commercial exploitation, mandarins have several disadvantages: the fruit has poor holding capacity on the tree, the peel is tender and therefore the fruits do not stand shipping well, and the tree has a tendency toward alternate bearing.

The fruit is oblate, the peel bright-orange or red-orange when ripe, loose, separating easily from the segments. Seeds are small, pointed at one end, green inside.

Edible Uses
Edible Parts: Fruit.
Edible Uses: Condiment.
Fruit - raw or cooked in puddings, cakes, confectionery etc. It is sweet and delicious. The fruit is up to 8cm in diameter. The dried rind of the fruit has a sweet spicy flavour and is often used as a flavouring in cakes etc.

Medicinal Uses
Analgesic; Antiasthmatic; Anticholesterolemic; Antiemetic; Antiinflammatory; Antiscorbutic; Antiseptic; Antitussive; Aphrodisiac; Astringent; Carminative; Expectorant; Laxative;
Miscellany; Stomachic; Tonic.
Citrus species contain a wide range of active ingredients and research is still underway in finding uses for them. They are rich in vitamin C, flavonoids, acids and volatile oils. They also contain coumarins such as bergapten which sensitizes the skin to sunlight. Bergapten is sometimes added to tanning preparations since it promotes pigmentation in the skin, though it can cause dermatitis or allergic responses in some people. Some of the plants more recent applications are as sources of anti-oxidants and chemical exfoliants in specialized cosmetics. The fruit is antiemetic, aphrodisiac, astringent, laxative and tonic. The flowers are stimulant. The pericarp is analgesic, antiasthmatic, anticholesterolemic, anti-inflammatory, antiscorbutic, antiseptic, antitussive, carminative, expectorant, stomachic. It is used in the treatment of dyspepsia, gastro-intestinal distension, cough with profuse phlegm, hiccup and vomiting. The endocarp is carminative and expectorant. It is used in the treatment of dyspepsia, gastro-intestinal distension, coughs and profuse phlegm. The unripened green exocarp is carminative and stomachic. It is used in the treatment of pain in the chest and hypochondrium, gastro-intestinal distension, swelling of the liver and spleen and cirrhosis of the liver. The seed is analgesic and carminative. It is used in the treatment of hernia, lumbago, mastitis and pain or swellings of the testes.