The kaffir lime is a rough, bumpy green fruit that grows on very thorny bush with aromatic leaves. It is well suited to container growing. The green lime fruit is distinguished by its bumpy exterior and its small size (approx. 4 cm wide).

Other names for Citrus x hystrix:

The Oxford Companion to Food (ISBN 0-19-211579-0) recommends that the name kaffir lime should be avoided in favor of makrud lime because kaffir is an offensive term in some cultures, and also has no clear reason for being attached to this plant. (For this reason, some South Africans refer to the fruit as K-lime.) However, kaffir lime appears to be much more common.

Its hourglass-shaped leaves (comprising the leaf blade plus a flattened, leaf-like leaf-stalk or petiole) are widely used in Thai cuisine (for dishes such as tom yum), Lao cuisine, and Cambodian cuisine, for the base paste known as “Krueng”. The leaves are also popular in Indonesian cuisine (especially Balinese and Javanese), for foods such as sayur assam - literally sour vegetables, and are also used along with Indonesian bay leaf for chicken and fish. They are also found in Malay and Burmese cuisines.

The leaves can be used fresh or dried, and can be stored frozen.

The juice and rinds of the kaffir lime are used in traditional Indonesian medicine; for this reason the fruit is sometimes referred to in Indonesia as jeruk obat - literally “medicine citrus”. The oil from the rind also has strong insecticidal properties. 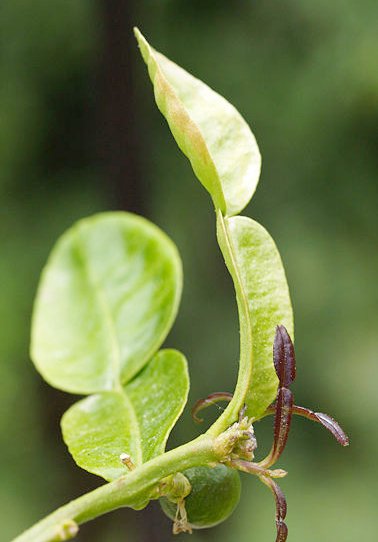