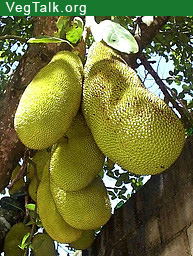 The jackfruit, Artocarpus heterophyllus Lam. (syns. A. integrifolius Auct. NOT L. f.; A integrifolia L. f.; A. integra Merr.; Rademachia integra Thunb. ), of the family Moraceae, is also called jak-fruit, jak, jaca, and, in Malaysia and the Philippines, nangka; in Thailand, khanun; in Cambodia, khnor; in Laos, mak mi or may mi; in Vietnam, mit. It is an excellent example of a food prized in some areas of the world and allowed to go to waste in others. O.W. Barrett wrote in 1928: “;The jaks . . . are such large and interesting fruits and the trees so well-behaved that it is difficult to explain the general lack of knowledge concerning them.”;

The "rind’ or exterior of the compound or aggregate fruit is green or yellow when ripe and composed of numerous hard, cone-like points attached to a thick and rubbery, pale yellow or whitish wall. The interior consists of large “bulbs” (fully developed perianths) of yellow, banana-flavored flesh, massed among narrow ribbons of thin, tough undeveloped perianths (or perigones), and a central, pithy core. Each bulb encloses a smooth, oval, light-brown “seed” (endocarp) covered by a thin white membrane (exocarp). The seed is 3/4 to 1 1/2 in (2-4 cm) long and 1/2 to 3/4 in (1.25-2 cm) thick and is white and crisp within. There may be 100 or up to 500 seeds in a single fruit. When fully ripe, the unopened jackfruit emits a strong disagreeable odor, resembling that of decayed onions, while the pulp of the opened fruit smells of pineapple and banana.

Toxicity
Even in India there is some resistance to the jackfruit, attributed to the belief that overindulgence in it causes digestive ailments. Burkill declares that it is the raw, unripe fruit that is astringent and indigestible. The ripe fruit is somewhat laxative; if eaten in excess it will cause diarrhea. Raw jackfruit seeds are indigestible due to the presence of a powerful trypsin inhibitor. This element is destroyed by boiling or baking.

Varieties
In South India, jackfruits are classified as of two general types: 1) Koozha chakka, the fruits of which have small, fibrous, soft, mushy, but very sweet carpels; 2) Koozha pazham, more important commercially, with crisp carpers of high quality known as Varika. These types are apparently known in different areas by other names such as Barka, or Berka (soft, sweet and broken open with the hands), and Kapa or Kapiya (crisp and cut open with a knife). The equivalent types are known as Kha-nun nang (firm; best) and Kha-nun lamoud (soft) in Thailand; and as Vela (soft) and Varaka, or Waraka (firm) in Ceylon. The Peniwaraka, or honey jak, has sweet pulp, and some have claimed it the best of all. The Kuruwaraka has small, rounded fruits. Dr. David Fairchild, writing of the honey jak in Ceylon, describes the rind as dark-green in contrast to the golden yellow pulp when cut open for eating, but the fruits of his own tree in Coconut Grove and those of the Matheson tree which he maintained were honey jaks are definitely yellow when ripe. The Vela type predominates in the West Indies.
Firminger described two types: the Khuja (green, hard and smooth, with juicy pulp and small seeds); the Ghila (rough, soft, with thin pulp, not very juicy, and large seeds). Dutta says Khujja, or Karcha, has pale-brown or occcasionally pale-green rind, and pulp as hard as an apple; Ghila, or Ghula, is usually light-green, occasionally brownish, and has soft pulp, sweet or acidulously sweet. He describes 8 varieties, only one with a name. This is Hazari; similar to Rudrakshi; which has a relatively smooth rind and flesh of inferior quality.
The ‘Singapore’, or ‘Ceylon’, jack, a remarkably early bearer producing fruit in 18 months to 2 1/2 years from transplanting, was introduced into India from Ceylon and planted extensively in 1949. The fruit is of medium size with small, fibrous carpers which are very sweet. In addition to the summer crop (June and July), there is a second crop from October to December. In 1961, the Horticultural Research Institute at Saharanpur, India, reported the acquisition of air-layered plants of the excellent varieties, ‘Safeda’, ‘Khaja’, ‘Bhusila’, ‘Bhadaiyan’ and ‘Handia’ and others. The Fruit Experimental Station at Burliar, established a collection of 54 jackfruit clones from all producing countries, and ultimately selected ‘T Nagar Jack’ as the best in quality and yield. The Fruit Experimental Station at Kallar, began breeding work in 1952 with a view to developing short, compact, many-branched trees, precocious and productive, bearing large, yellow, high quality fruits, 1/2 in the main season, 1/2 late. ‘Singapore Jack’ was chosen as the female parent because of its early and late crops; and, as the male parent, ‘Velipala’, a local selection from the forest having large fruits with large carpers of superior quality, and borne regularly in the main summer season. After 25 years of testing, one hybrid was rated as outstanding for precocity, fruit size, off-season as well as main season production, and yield excelling its parents. It had not been named when reported on by Chellappan and Roche in 1982. In Assam, nurserymen have given names such as ‘Mammoth’, ‘Everbearer’, and ‘Rose-scented’ to preferred types.

Westerners generally will find the jackfruit most acceptable in the full-grown but unripe stage, when it has no objectionable odor and excels cooked green breadfruit and plantain. The fruit at this time is simply cut into large chunks for cooking, the only handicap being its copious gummy latex which accumulates on the knife and the hands unless they are first rubbed with salad oil. The chunks are boiled in lightly salted water until tender, when the really delicious flesh is cut from the rind and served as a vegetable, including the seeds which, if thoroughly cooked, are mealy and agreeable. The latex clinging to the pot may be removed by rubbing with oil. The flesh of the unripe fruit has been experimentally canned in brine or with curry. It may also be dried and kept in tins for a year. Cross sections of dried, unripe jackfruit are sold in native markets in Thailand. Tender young fruits may be pickled with or without spices.
If the jackfruit is allowed to ripen, the bulbs and seeds may be extracted outdoors; or, if indoors, the odorous residue should be removed from the kitchen at once. The bulbs may then be enjoyed raw or cooked (with coconut milk or otherwise); or made into ice cream, chutney, jam, jelly, paste, “leather” or papad, or canned in sirup made with sugar or honey with citric acid added. The crisp types of jackfruit are preferred for canning. The canned product is more attractive than the fresh pulp and is sometimes called “vegetable meat”. The ripe bulbs are mechanically pulped to make jackfruit nectar or reduced to concentrate or powder. The addition of synthetic flavoring—ethyl and n-butyl esters of 4-hydroxybutyric acid at 120 ppm and 100 ppm, respectively greatly improves the flavor of the canned fruit and the nectar.
If the bulbs are boiled in milk, the latter when drained off and cooled will congeal and form a pleasant, orange colored custard. By a method patented in India, the ripe bulbs may be dried, fried in oil and salted for eating like potato chips. Candied jackfruit pulp in boxes was being marketed in Brazil in 1917. Improved methods of preserving and candying jackfruit pulp have been devised at the Central Food Technological Research Institute, Mysore, India. Ripe bulbs, sliced and packed in sirup with added citric acid, and frozen, retain good color, flavor and texture for one year. Canned jackfruit retains quality for 63 weeks at room temperature—75° to 80°F (23.89°-26.67°C), with only 3% loss of B-carotene. When frozen, the canned pulp keeps well for 2 years.
In Malaya, where the odor of the ripe fruit is not avoided, small jackfruits are cut in half, seeded, chilled, and brought to the table filled with ice cream.
The ripe bulbs, fermented and then distilled, produce a potent liquor.
The seeds, which appeal to all tastes, may be boiled or roasted and eaten, or boiled and preserved in sirup like chestnuts. They have also been successfully canned in brine, in curry, and, like baked beans, in tomato sauce. They are often included in curried dishes. Roasted, dried seeds are ground to make a flour which is blended with wheat flour for baking.
Where large quantities of jackfruit are available, it is worthwhile to utilize the inedible portion, and the rind has been found to yield a fair jelly with citric acid. A pectin extract can be made from the peel, undeveloped perianths and core, or just from the inner rind; and this waste also yields a sirup used for tobacco curing.
Tender jackfruit leaves and young male flower clusters may be cooked and served as vegetables.