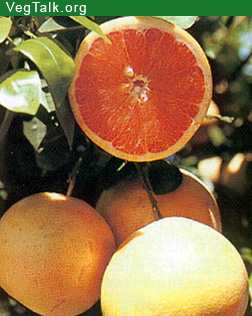 The grapefruit was first described in 1750 by Griffith Hughes who called it the “forbidden fruit” of Barbados. In 1789, Patrick Browne reported it as growing in most parts of Jamaica and he referred to it as “forbidden fruit” or “smaller shaddock”. In 1814, John Lunan, in Hortus Jamaicensis, mentions the “grapefruit” as a variety of the shaddock, but not as large; and, again, as “forbidden fruit”, “a variety of the shaddock, but the fruit is much smaller, having a thin, tough, smooth, pale yellow rind”. In 1824, DeTussac mentions the “forbidden fruit or smaller shaddock” of Jamaica as a variety of shaddock the size of an orange and borne in bunches. William C. Cooper, a citrus scientist (USDA, ARS, Orlando, Florida, to 1975), traveled widely observing all kinds of citrus fruits. In his book, In Search of the Golden Apple, he tells of the sweet orange and the grapefruit growing wild on several West Indian islands. He cites especially a fruit similar to grapefruit that is called chadique growing wild on the mountains of Haiti and marketed in Port-au-Prince. The leaves are like those of the grapefruit. He says that it was from the nearby Bahama Islands in 1823 that Count Odette Phillipe took grapefruit seeds to Safety Harbor near Tampa, Florida. When the seedlings fruited, their seeds were distributed around the neighborhood.
At first, the tree was grown only as a novelty in Florida and the fruit was little utilized. Even in Jamaica, the trees were often cut down. Mrs. Mary McDonald Carter of Eustis, Florida, was quoted in the Farm and Livestock Record, Jacksonville, in 1953, as relating that her father, John A. MacDonald, settled in Orange County in 1866. In 1870, he was attracted to a single grapefruit tree with clusters of lemon-colored fruits on the Drawdy property at Blackwater. He bought the entire crop of fruits, planted the seeds and established the first grapefruit nursery. The first grapefruit grove planted from this nursery by a man named Hill was sold in 1875 to George W. Bowen who developed it commercially. In 1881, MacDonald bought the Drawdy crop and once more raised seedlings for his nursery in Eustis. Early settlers began planting the tree and acquired a taste for the fruit. There was already a small demand in the North. New York imported 78,000 fruits from the West Indies in 1874. Florida started sending small shipments to markets in New York and Philadelphia between 1880 and 1885.
In 1898, Dr. David Fairchild was excited to learn of a grove of 2,000 grapefruit trees in the Kendall area south of Miami on the property of the Florida East Coast Railway. In 1904, he was amazed to see one tree in the door-yard of the Kennedy ranch in southern Texas where he thought the climate too cold for it. He was told that the tree had been frozen to the ground but had recovered. He predicted that a citrus industry could not be established in that region of the country. In 1928, he photographed the same tree, which had been killed back several times in the interim, but was again in fruit. By 1910, grapefruit had become an important commercial crop in the Rio Grande Valley and, to a lesser extent, in Arizona and desert valleys of California. By 1940, the United States was exporting close to 11,000,000 cases of grape-fruit juice and nearly one-half million cases of canned sections. Cultivation had reached commercial proportions in Jamaica and Trinidad and spread to Brazil, South America and Israel. In 1945/46, the United States (mainly Florida) produced a record of 2,285,000 tons of grapefruit. In 1967/68, this country accounted for 70% of the world crop despite a great decline in Texas production because of severe weather. Grapefruit was moving forward by leaps and bounds. Israel, in 1967, supplied only 11% of the world crop but, by 1970, her production had increased by 300%. In 1980, Florida exported just under 10 million boxes, making grapefruit this state’s most valuable export crop. Japan is the main importer and has, at times, suspended shipments to determine the safety of fungicide residues or because of discovery of larvae of the Caribbean fruit fly. Great care is taken to maintain this important trade. Other countries which had entered the grapefruit industry were Mexico, Argentina, Cyprus, Morocco and some areas of South America which raise grapefruit for local markets. In Central America, the grapefruit is not much favored because of its acidity.
In the late 1960’s and early 1970’s, Mexico was rapidly expanding its grapefruit plantings, especially in the states of Tamaulipas and Veracruz, to save its citrus industry in view of the decline in market value of oranges and tangerines brought on by over-production. Furthermore, there were great advantages in the lower costs of producing grapefruit without irrigation and with good biological control of pests. Now Mexico exports large quantities of grapefruit to the United States and lesser amounts to Canada and Japan. Puerto Rico formerly exported grapefruit to the United States but is no longer able to compete in the trade and has only remnants of former plantations. Cuba has planted 370,000 acres (150,000 ha) of citrus, mostly grapefruit with expectations of exporting to the Soviet Union and eastern European countries. The grapefruit is grown only in a small way in the Orient where the pummelo is cultivated. In recent years, the grapefruit has become established in India in hot regions where the sweet orange and the mandarin are prone to sunburn.

The grapefruit tree reaches 15 to 20 ft (4.5-6 m) or even 45 ft (13.7 m) with age, has a rounded top of spreading branches; the trunk may exceed 6 in (15 cm) in diameter; that of a very old tree actually attained nearly 8 ft (2.4 m) in circumference. The twigs normally bear short, supple thorns. The evergreen leaves are ovate, 3 to 6 in (7.5-15 cm) long, and 1 3/4 to 3 in (4.5-7.5 cm) wide; dark-green above, lighter beneath, with minute, rounded teeth on the margins, and dotted with tiny oil glands; the petiole has broad, oblanceolate or obovate wings. The white, 4-petalled flowers, are 1 3/4 to 2 in (4.5-5 cm) across and borne singly or in clusters in the leaf axils. The fruit is nearly round or oblate to slightly pear-shaped, 4 to 6 in (10-15 cm) wide with smooth, finely dotted peel, up to 3/8 in (1 cm) thick, pale-lemon, sometimes blushed with pink, and aromatic outwardly; white, spongy and bitter inside. The center may be solid or semi-hollow. The pale-yellow, nearly whitish, or pink, or even deep-red pulp is in 11 to 14 segments with thin, membranous, somewhat bitter walls; very juicy, acid to sweet-acid in flavor when fully ripe. While some fruits are seedless or nearly so, there may be up to 90 white, elliptical, pointed seeds about 1/2 in (1.25 cm) in length. Unlike those of the pummelo, grapefruit seeds are usually polyembryonic. The number of fruits in a cluster varies greatly; a dozen is unusual but there have been as many as 20.

Drug interactions
Grapefruit can have a number of interactions with drugs, often increasing the effective potency of compounds. Grapefruit contains naringin, bergamottin and dihydroxybergamottin, which inhibit the cytochrome P450 isoform CYP3A4 in the intestine. It is via inhibition of this enzyme that grapefruit increases the effects of buspirone (Buspar), carbamazepine, caffeine, several statin drugs (such as simvastatin), terfenadine, felodipine, nifedipine, verapamil, estradiol, tacrolimus, dextromethorphan (significant only at recreational doses), benzodiazepines, and ciclosporin. The effect of grapefruit juice with regard to drug absorption was originally discovered in 1989. However, the effect became well-publicized after being responsible for a number of deaths due to overdosing on medication.

Medicinal effects
There is evidence that citrus grapefruit seeds have low levels of antioxidant properties. Grapefruit forms a core part of the “grapefruit diet”, the theory being that the fruit’s low glycemic index is able to help the body’s metabolism burn fat.
Grapefruit peel oil is used in aromatherapy and it is historically known for its aromatic scent. Grapefruit pectin is a beneficial source of soluble fiber as part of a well balanced, healthy diet. Grapefruit seed extract has been claimed to be a strong antimicrobial with proven activity against bacteria and fungi. However, studies have shown the efficacy of grapefruit seed extract as an antimicrobial is not demonstrated. Although GSE is promoted as a highly effective plant-based preservative by some natural personal care manufacturers, studies indicate the universal antimicrobial activity associated with GSE preparations is merely due to contamination with synthetic preservatives.

As a relatively new food, the grapefruit has made great advances in the past 75 years. In 1970, consumption of grapefruit was temporarily heightened by a widely promoted “grapefruit diet” plan claimed to achieve a loss of 10 lbs (4.5 kg) in 10 days and continuous gradual loss until the achievement of normal body weight. In 1983, the United States Department of Agriculture Marketing Service reported that, among fresh fruits and vegetables consumed in Metropolitan New York, grapefruit was exceeded only by potatoes, lettuce, oranges and apples.
Grapefruit is customarily a breakfast fruit, chilled, cut in half, the sections loosened from the peel and each other by a special curved knife, and the pulp spooned from the “half-shell”. Some consumers sweeten it with white or brown sugar, or a bit of honey. Some add cinnamon, nutmeg or cloves. As an appetizer before dinner, grapefruit halves may be similarly sweetened, lightly broiled, and served hot, often topped with a maraschino cherry. The sections are commonly used in fruit cups or fruit salads, in gelatins or puddings and tarts. They are commercially canned in sirup. In Australia, grapefruit is commercially processed as marmalade. It may also be made into jelly.
The juice is marketed as a beverage fresh, canned, or dehydrated as powder, or concentrated and frozen. It can be made into an excellent vinegar or carefully fermented as wine.
Grapefruit peel is candied and is an important source of pectin for the preservation of other fruits. The peel oil, expressed or distilled, is commonly employed in soft-drink flavoring, after the removal of 50% of the monoterpenes. The main ingredient in the outer peel oil is nookatone. Extracted nookatone, added to grapefruit juice powder, enhances the flavor of the reconstituted juice. Naringin, extracted from the inner peel (albedo), is used as a bitter in “tonic” beverages, bitter chocolate, ice cream and ices. It is chemically converted into a sweetener about 1,500 times sweeter than sugar. After the extraction of naringin, the albedo can be reprocessed to recover pectin.
Grapefruit seed oil is dark and exceedingly bitter but, bleached and refined, it is pale-yellow, bland, much like olive oil in flavor, and can be used similarly. Because it is an unsaturated fat, its production has greatly increased since 1960.