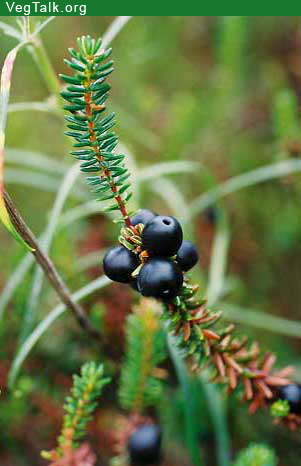 Habitats
Woodland Garden; Sunny Edge; Dappled Shade; Ground Cover;
Crowberry (Empetrum) is a small genus of dwarf evergreen shrubs that bear edible fruit. They are commonly found in the northern hemisphere, from temperate to subarctic climates, and also in the Andes of South America and on Tristan da Cunha (South Atlantic Ocean). The typical habitat is on moorlands, tundra and muskeg, but also in spruce forests.

Edible Uses
Edible Parts: Fruit.
Edible Uses: Tea.
Fruit - raw or cooked. It can taste slightly acid or insipid. Not very desirable, it tastes best after a frost. A watery flavour, it is mainly used for making drinks, pies, preserves etc. The Inuit dry or freeze them for winter use. The fruit can hang on the plant all winter. The fruit is about 7.5mm in diameter. A tea can be made from the twigs.

There are two species of crowberry, E. nigrum (Crowberry) and E. eamesii (Rockberry). Both are evergreen mat forming shrubs, with small, light green needle-like leaves 3-10 mm long. The flowers are small and plain looking. The fruit is a fairly dry black berry, smaller than the alpine bearberry, but with somewhat better flavour, and looks similar to a blueberry.
The genus was previously classified in its own family Empetraceae, but recent genetic studies by the Angiosperm Phylogeny Group have resulted in the submergence of this family into the Ericaceae.

Recipes made mainly with this Fruit
The leaves and stems are used in Dena’ina medicine for diarrhoea and stomach problems; they are boiled or soaked in hot water, and the strained liquid drunk. Some claim the berry juice is good for kidney trouble.
In Dena’ina plantlore in the Outer and Upper Inlet area of Lake Clark, the root is also used as a medicine, being used to remove a growth on an eye and to heal sore eyes. The roots are boiled and the eyes are washed with the strained, cooled tea, to which a little sugar may be added. Some people say blackberry stems can be used in the same way for these ailments.
Crowberries contain mostly water. Their vitamin content is low, as is also the concentration of volatile liquids, the lack of which makes them almost odorless. The acidity is lower than is typically encountered in forest berries, and benzene acids are almost absent.
.

What kind of kidney problems is this used to treat? Do you have any references related to this?