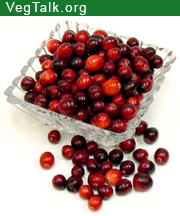 Cranberries are a group of evergreen dwarf shrubs or trailing vines in the genus Vaccinium subgenus Oxycoccus, or in some treatments, in the distinct genus Oxycoccus. They are found in acidic bogs throughout the cooler parts of the Northern Hemisphere.
Cranberries are low, creeping shrubs or vines up to 2 m long and 5 to 20 cm in height , with slender, wiry stems, not thickly woody, and small evergreen leaves. The flowers are dark pink, with very distinct reflexed petals, leaving the style and stamens fully exposed and pointing forward. They are pollinated by domestic honey bees. The fruit is a berry that is larger than the leaves of the plant; it is initially white, but turns a deep red when fully ripe. It is edible, with an acidic taste that can overwhelm its sweetness.
Cranberries are a major commercial crop in certain US states and Canadian provinces (see “Cultivation and Uses” below). Most cranberries are processed into products such as juice, sauce, and sweetened dried cranberries, with the remainder sold fresh to consumers. Cranberry sauce is widely regarded as an indispensable part of the traditional American and Canadian Thanksgiving menu.

The fruit is a berry that is larger than the leaves of the plant; it is initially white, but turns a deep red when fully ripe. It is edible, with an acidic taste that can overwhelm its sweetness.

Edible Parts: Fruit.
Edible Uses: Tea.
Fruit - raw or cooked. Considered by some to be the most pleasantly-flavoured of British wild fruits. The fruit is high in pectin, this means that it can be mixed with fruits that are low in pectin to help them set when making jam. Pectin has also been shown to have a valuable role in the diet, where it is said to protect the body against radiation. An acid taste, the fruits are usually cooked in preserves etc. Although smaller than the related V. macrocarpon, the fruit of this species is considered to be of superior taste. The fruit is about 6mm in diameter. A tea is made from the leaves.

Medicinal Uses
Antiemetic.
An infusion of the plant has been used to treat cases of slight nausea

Cleanser; Dye; Ground cover.
The juice of the fruit is used to clean silver[6]. A red dye is obtained from the fruit[13]. Plants can be grown as a ground cover when planted about 1 metre apart each way[208]. Plants rapidly form a dense carpet when they are thriving[208].

There are three to four species of cranberry, classified in two sections:
Subgenus Oxycoccus, sect. Oxycoccus
• Vaccinium oxycoccus or Oxycoccus palustris (Common Cranberry or Northern Cranberry) is widespread throughout the cool temperate Northern Hemisphere, including northern Europe, northern Asia and northern North America. It has small 5-10 mm leaves. The flowers are dark pink, with a purple central spike, produced on finely hairy stems. The fruit is a small pale pink berry, with a refreshing sharp acidic flavour.
• Vaccinium microcarpum or Oxycoccus microcarpus (Small Cranberry) occurs in northern Europe and northern Asia, and differs from V. oxycoccus in the leaves being more triangular, and the flower stems hairless. Some botanists include it within V. oxycoccus.
• Vaccinium macrocarpon or Oxycoccus macrocarpus (American Cranberry, Bearberry) native to northeastern North America (eastern Canada, and eastern United States, south to North Carolina at high altitudes). It differs from V. oxycoccus in the leaves being larger, 10-20 mm long, and in its slightly apple-like taste.
Subgenus Oxycoccus, sect. Oxycoccoides
• Vaccinium erythrocarpum or Oxycoccus erythrocarpus (Southern Mountain Cranberry) native to southeastern North America at high altitudes in the southern Appalachian Mountains, and also in eastern Asia.
Cranberries are related to the bilberries, blueberries, and huckleberries, all in Vaccinium subgenus Vaccinium. These differ in having stouter, woodier stems forming taller shrubs, and in the bell-shaped flowers, the petals not being reflexed.
Some plants of the completely unrelated genus Viburnum are sometimes inaccurately called “highbush cranberries”.
Cranberries are susceptible to false blossom, a harmful but controllable phytoplasma disease that is most common in the eastern production areas of Massachusetts and New Jersey

Usually cranberries as fruit are served as a compote or jelly, often known generically as cranberry sauce. Such preparations are traditionally served with roast turkey meat and are considered by some to be a staple of the Canadian and US holiday Thanksgiving. The berry is also used in baking (muffins, scones and cakes) but, unlike many other berries, is normally considered too sharp to be eaten unaccompanied.
Fresh cranberries can be frozen at home, and will keep up to nine months; they can be used directly in recipes without thawing.
Cranberry juice, usually sweetened to reduce its natural severe tartness and make “cranberry juice cocktail” or blended with other fruit juices, is a major use of cranberries.