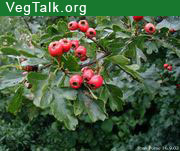 The Common Hawthorn Crataegus monogyna is a species of hawthorn native to Europe, northwest Africa and western Asia. Other common names include May, Maythorn, Quickthorn, and Haw.
It is a broadly spreading shrub or small tree 5-14 m tall, with a dense crown. The bark is dull brown with vertical orange cracks. The leaves are 2-4 cm long, obovate and deeply lobed, sometimes almost to the midrib, with the lobes spreading at a wide angle. The upper surface is dark green above and paler underneath.
The flowers are produced in late spring (May to early June in its native area) in corymbs of 5-25 together; each flower is about 1 cm diameter, and has five white petals, numerous red stamens, and a single style; they are moderately fragrant. Later in the year they bear numerous Haws. The Haw is a small, oval dark red fruit about 1 cm long, berry-like, but structurally a pome containing a single seed. Haws are important for wildlife in winter, particularly thrushes and waxwings; these birds eat the haws and disperse the seeds in their droppings.
It is distinguished from the related but less widespread Midland Hawthorn C. laevigata in the leaves being deeply lobed, with spreading lobes, and in the flowers having just one style, not two or three. However they are inter-fertile and hybrids occur frequently; they are only entirely distinct in their more typical forms.

Edible Parts: Flowers; Fruit; Leaves.
Edible Uses: Coffee; Tea.
Fruit - raw or cooked. Not very appetizing raw, it is normally used for making jams and preserves. The fruit can be dried, ground, mixed with flour and used for making bread etc. The fruit is about 1cm in diameter. There are up to five fairly large seeds in the centre of the fruit, these often stick together and so the effect is of eating a cherry-like fruit with a single seed. Young shoots - raw. A pleasant nutty flavour, they are a good addition to the salad bowl. A tea is made from the dried leaves, it is a china tea substitute. The roasted seeds are a coffee substitute. The flowers are used in syrups and sweet puddings.

Antispasmodic; Astringent; Cardiotonic; Diuretic; Hypotensive; Sedative; Tonic; Vasodilator.
Hawthorn is an extremely valuable medicinal herb. It is used mainly for treating disorders of the heart and circulation system, especially angina. Western herbalists consider it a ‘food for the heart’, it increases the blood flow to the heart muscles and restores normal heart beat. This effect is brought about by the presence of bioflavonoids in the fruit, these bioflavonoids are also strongly antioxidant, helping to prevent or reduce degeneration of the blood vessels. The fruit is antispasmodic, cardiac, diuretic, sedative, tonic and vasodilator. Both the fruits and flowers of hawthorns are well-known in herbal folk medicine as a heart tonic and modern research has borne out this use. The fruits and flowers have a hypotensive effect as well as acting as a direct and mild heart tonic. They are especially indicated in the treatment of weak heart combined with high blood pressure, they are also used to treat a heart muscle weakened by age, for inflammation of the heart muscle, arteriosclerosis and for nervous heart problems. Prolonged use is necessary for the treatment to be efficacious. It is normally used either as a tea or a tincture. Hawthorn is combined with ginkgo (Ginkgo biloba) to enhance poor memory, working by improving the blood supply to the brain. The bark is astringent and has been used in the treatment of malaria and other fevers. The roots are said to stimulate the arteries of the heart.

Fuel; Hedge; Wood.
A good hedge plant, it is very tolerant of being cut and of neglect and is able to regenerate if cut back severely, it makes a good thorny stock-proof barrier and resists very strong winds. It is often used in layered hedges. The cultivar ‘Stricta’ has made a very good hedge 3.5 metres tall in an exposed maritime position at Rosewarne in N. Cornwall. Wood - very hard and tough, difficult to work. Used for tool handles etc. Valued in turning. A good fuel, giving out a lot of heat.

A number of hybrids exist, some of which are used as garden shrubs. The most widely used hybrid is Crataegus × macrocarpa (C. monogyna × C. laevigata; syn. C. × media), of which several cultivars are known, including the very popular ‘Paul’s Scarlet’ with dark pink double flowers. Other garden shrubs that have sometimes been suggested as possible hybrids involving the Common Hawthorn, include the Various-leaved Hawthorn of the Caucasus, which is only very occasionally found in parks and gardens.

In herbalism the active ingredients are Flowers: tannins, flavonoids, essential oil, triterpene-carbonic acids and purine derivatives. Fruits: tannins, flavonoids, pigments and vitamins. An infusion of hawthorn is used to treat various heart and circulatory problems and to support Digitalis therapy. The young leaves are good in salads. The haws are used to make wine, jelly and to add flavour to brandy.