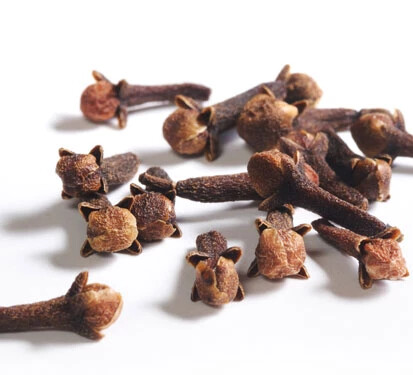 Cloves (Syzygium aromaticum, syn. Eugenia aromaticum or Eugenia caryophyllata) are the aromatic dried flower buds of a tree in the family Myrtaceae. It is native to Indonesia and used as a spice in cuisine all over the world. The name derives from French clou, a nail, as the buds vaguely resemble small irregular nails in shape. Cloves are harvested primarily in Zanzibar, Indonesia and Madagascar; it is also grown in Pakistan, India, and Sri Lanka.

The clove tree is an evergreen which grows to a height ranging from 10-20 m, having large oval leaves and crimson flowers in numerous groups of terminal clusters. The flower buds are at first of a pale color and gradually become green, after which they develop into a bright red, when they are ready for collecting. Cloves are harvested when 1.5-2 cm long, and consist of a long calyx, terminating in four spreading sepals, and four unopened petals which form a small ball in the centre.

According to FAO, Indonesia produced almost 80% of the world’s clove output in 2005 followed at a distance by Madagascar and Tanzania.

Cloves can be used in cooking either whole or in a ground form, but as they are extremely strong, they are used sparingly. The spice is used throughout Europe and Asia and is smoked in a type of cigarettes locally known as kretek in Indonesia. Cloves are also an important incense material in Chinese and Japanese culture.

Cloves have historically been used in Indian cuisine (both North Indian and South Indian) as well as in Mexican cuisine, where it is often paired together with cumin and canela (cinnamon). [1]In the north Indian cuisine, it is used in almost every sauce or side dish made, mostly ground up along with other spices. They are also a key ingredient in tea along with green cardamoms. In the south Indian cuisine, it finds extensive use in the biryani dish (similar to the pilaf, but with the addition of local spice taste), and is normally added whole to enhance the presentation and flavor of the rice.

Cloves are used in Ayurveda, Chinese medicine and western herbalism and dentistry where the essential oil is used as an anodyne for dental emergencies. Cloves are used as a carminative, to increase hydrochloric acid in the stomach and to improve peristalsis. Cloves are also said to be a natural anthelmintic.[2] The essential oil is used in aromatherapy when stimulation and warming is needed, especially for digestive problems. Topical application over the stomach or abdomen will warm the digestive tract.

In Chinese medicine cloves or ding xiang are considered acrid, warm and aromatic, entering the kidney, spleen and stomach channels, and are notable in their ability to warm the middle, direct stomach qi downward, to treat hiccough and to fortify the, kidney yang.[3] Because the herb is so warming it is contraindicated in any persons with fire symptoms and according to classical sources should not be used for anything except cold from yang deficiency. As such it is used in formulas for impotence or clear vaginal discharge from yang deficiency, for morning sickness together with ginseng and patchouli, or for vomiting and diarrhea due to spleen and stomach coldness.[4] This would translate to hypochlorhydria. (Note that capitalized organ names refer to the Chinese meridians named after them.)