The Tamarind (Tamarindus indica) (from the Arabic: تمر هندي tamar hindi = Indian date) is in the family Fabaceae. The genus Tamarindus is monotypic (having only a single species). It is a tropical tree, native to tropical Africa, including parts of the Madagascar dry deciduous forests, the tree grows wild throughout the Sudan and was so long ago introduced into and adopted in India that it has often been reported as indigenous there also, and it was apparently from India that it reached the Persians and the Arabs who called it “tamar hindi” (Indian date, from the date-like appearance of the dried pulp), giving rise to both its common and generic names. Unfortunately, the specific name, “indica”, also perpetuates the illusion of Indian origin. The fruit was well known to the ancient Egyptians and to the Greeks in the 4th Century B.C.

The tree has long been naturalized in the East Indies and the islands of the Pacific. One of the first tamarind trees in Hawaii was planted in 1797. The tamarind was certainly introduced into tropical America, Bermuda, the Bahamas, and the West Indies much earlier. In all tropical and near-tropical areas, including South Florida, it is grown as a shade and fruit tree, along roadsides and in dooryards and parks. There are commercial plantings in Mexico, Belize and other Central American countries and in northern Brazil. In India there are extensive tamarind orchards producing 275,500 tons (250,000 MT) annually. The pulp is marketed in northern Malaya and to some extent wherever the tree is found even if there are no plantations.

The tree can grow up to 20 m in height, and stays evergreen in regions without a dry season. Tamarind timber consists of hard, dark red heartwood and softer, yellowish sapwood. The leaves consist of 10–40 leaflets. The flowers are produced in racemes. The fruit is a brown pod-like legume, which contains a soft acidic pulp and many hard-coated seeds. The seeds can be scarified to enhance germination.

Alternative names include Indian date, translation of Arabic تمر هندي tamr hindī. In Malaysia it is called asam in Malay and swee boey in Hokkien (Min Nan). In Indonesia it is called asem (or asam) Jawa (means Javanese asam) in Indonesian. In the Philippines it is called sampaloc in Tagalog and sambag in Cebuano. In Oriya it is called [Tentuli]. In Hindi it is called imli. In Marathi it is called chinch. In Bangla, the term is tẽtul. In Sinhala the name is siyambala, in Telugu it is called Chintachettu (tree) and Chintapandu (fruit extract) and in Tamil and Malayalam it is puli. In Kannada it is called hunase. In Malagasy it is called voamadilo. The Vietnamese term is me. The tamarind is the provincial tree of the Phetchabun province of Thailand (in Thailand it is called Ma-kham). In Taiwan it is called Loan-tz.

Tamarind (Tamarindus indica) should not be confused with Manila tamarind (Pithecellobium dulce), which is an entirely different plant, though also in Fabaceae.

The fruit pulp is edible and popular. It is used as a spice in both Asian and Latin American cuisines, and is also an important ingredient in Worcestershire sauce, HP sauce and the Jamaican-produced Pickapeppa sauce [1]. The hard green pulp of a young fruit is very tart and acidic and is most often used as a component of savory dishes. The ripened fruit is sweeter, yet still distinctively sour, and can be used in desserts and sweetened drinks, or as a snack. In Thailand, there is a carefully cultivated sweet variety with little to no tartness grown specifically to be eaten as a fresh fruit. In temples especially in Asian countries, the pulp is used to clean brass shrine furniture, removing dulling and the greenish patina that forms.[2]

The wood is a bold red color. Due to its density and durability, tamarind heartwood can be used in making furniture and wood flooring. A tamarind switch is sometimes used as an implement for corporal punishment.

Tamarind trees are very common in South India, particularly in Tamil Nadu and Andhra Pradesh. They are used as ornamental trees and to provide shade on the country roads and highways. Tamarind is extensively used in the cuisine of both these states.

Some images of Tamarind 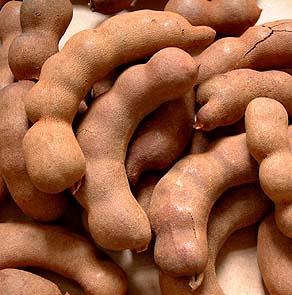