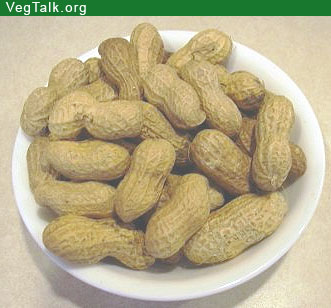 The cultivated peanut or groundnut (Arachis hypogaea L.), originated in South America (Bolivia and adjoining countries) and is now grown throughout the tropical an warm temperate regions of the, world. This crop was grown widely by native peoples of the New World at the time of European expansion in the sixteenth century and was subsequently taken to Europe, Africa, Asia, and the Pacific Islands. Peanut was introduced to the present southeastern United States during colonial times. Peanut was grown primarily as a garden crop in the United States until 1870. As a field crop, peanut was used commonly for hog pasture until about 1930.
Peanut, an important oil and food crop, is currently grown on approximately 42 million acres worldwide. It is the third major oilseed of the world next to soybean and cotton (FAO Food Outlook, 1990). India, China, and the United States have been the leading producers for over 25 years and grow about 70% of the world crop. Peanut was ranked ninth in acreage among major row crops in the United States during 1982 and second in dollar value per acre. Production of peanut in the U.S.A. during 1989-1990 was estimated at 1.8 million tons. or about 8% of the world production of 23.2 million tons (FAO Food Outlook, 1990). In 1983, Georgia, Texas, Alabama, and North Carolina grew 80% of the 1,375,000 acres of peanut in the United States. Virginia, Oklahoma, Florida, South Carolina, and New Mexico were the other states with more than 10,000 acres of peanut.
The peanut crop in the U.S.A. is composed of four market types from two subspecies. A. hypogaea hypogaea includes the Virginia and Runner market types. The second subspecies, A. hypogaea fastigiata, includes two botanical varieties of economic importance: vulgaris, the Spanish market type, and fastigiata, the Valencia market type. Virginia peanuts have the largest pods and elongated seeds, while Runner peanuts are medium-size varieties of the Virginia type. Spanish types have smaller round seeds and Valencia is intermediate in size and shape. Valencia is grown primarily in New Mexico, Spanish in Oklahoma and Texas, and other types in the Southeast and Texas. The Runner type includes 70% of the edible trade in the U.S.A. with Virginia and Spanish accounting for 20 and 10%, respectively. Valencia peanuts generally constitute less than 1% of the U.S. market (Knauft and Gorbet, 1989).
Peanut has only occasionally been grown in northern states due to its warm temperature requirement. Use of poorly adapted varieties and improper production practices usually resulted in low yields and poor quality nuts. However, peanut has good potential as a food crop in Minnesota and Wisconsin and could be an alternative cash crop to soybean, corn, potato, or fieldbean (Robinson, 1984, and Pendleton, 1977).

Edible Parts: Leaves; Seed; Seedpod.
Edible Uses: Coffee; Oil.
Seed - raw, cooked or ground into a powder. Peanuts are a staple food in many tropical zones and are widely exported to temperate area of the world. The seeds have a delicious nutty flavour and can be eaten on their own either raw or roasted. The seeds are commonly ground up and used as peanut butter in sandwiches etc. They can also be cooked in a variety of dishes and are also ground into a powder when they can be used with cereals to greatly improve the protein content of breads, cakes etc. The seed is very rich in protein and oil, it is also a good source of minerals and vitamins, especially the B complex. A nutritional analysis is available. A non-drying edible oil is obtained from the seed. This is one of the most commonly used edible oils is the world. It is similar in composition to olive oil and is often used in cooking, making margarines, salad oils etc. The oilseed cake is said to be a good source of arginine and glutamic acid, used in treating mental deficiencies. The roasted seed makes an excellent coffee substitute. Young pods may be consumed as a vegetable. Young leaves and tips are suitable as a cooked green vegetable. Javanese use the tips for lablab, and germinating seeds to make toge.

Medicinal Uses
Aperient; Demulcent; Emollient; Pectoral.
The oil from the seed is aperient, demulcent, emollient and pectoral. The seed is used mainly as a nutritive food. The seeds have been used in folk medicine as an anti-inflammatory, aphrodisiac and decoagulant. Peanuts play a small role in various folk pharmacopoeias. In China the nuts are considered demulcent, pectoral, and peptic; the oil aperient and emollient, taken internally in milk for treating gonorrhoea, externally for treating rheumatism. In Zimbabwe the peanut is used in folk remedies for plantar warts. Haemostatic and vasoconstrictor activity are reported. The alcoholic extract is said to affect isolated smooth muscles and frog hearts like acetylcholine. The alcoholic lipoid fraction of the seed is said to prevent haemophiliac tendencies and for the treatment of some blood disorders (mucorrhagia and arthritic haemorrhages) in haemophilia.

Allergies
Main article: Peanut allergy
Although many people enjoy foods made with peanuts, some people have severe allergic reactions. For people with peanut allergy, exposure can cause fatal anaphylactic shock. For these individuals, eating a single peanut or just breathing the dust from peanuts can cause a fatal reaction. An allergic reaction also can be triggered by eating foods that have been processed with machines that have previously processed peanuts, making avoiding such foods difficult.
A theory of the development of peanut allergy has to do with the way that peanuts are processed in North America versus other countries like China and India. Peanuts are widely eaten in China and India but peanut allergies are almost unheard of there. According to a 2003 study, roasting peanuts, as more commonly done in North America, causes the major peanut allergen Ara h2 to become a stronger inhibitor of the digestive enzyme trypsin, making it more resistant to digestion. Additionally, this allergen has also been shown to protect Ara h1, another major peanut allergen, from digestion - a characteristic further enhanced by roasting.
Though the allergy can last a lifetime, another 2003 study indicates that 23.3% of children will outgrow a peanut allergy.
Peanut allergy has been associated with the use of skin preparations containing peanut oil among children, but the evidence is not regarded as conclusive. Peanut allergies have also been associated with family history and intake of soy products.
Some school districts have banned peanuts, and there is now an experimental drug being tested to combat this allergy, called TNX-901.
As the peanut is a member of the legume family unrelated to other nuts, individuals with peanut allergies may not be allergic to the other types of nuts, and vice-versa

Other Uses
Biomass; Oil.
The seeds yield a non-drying oil that has a wide range of uses including the manufacture of pharmaceuticals, soaps, cold creams, pomades and lubricants, paints, emulsions for insect control, and fuel for diesel engines. Peanut hulls are used for furfural, fuel, as a filler for fertilizers or for sweeping compounds.

The various types are distinguished by branching habit and branch length. There are numerous varieties of each type of peanut. There are two main growth forms, bunch and runner. Bunch types grow upright, while runner types grow near the ground.
Each year new cultivars of peanuts are bred and introduced somewhere in the peanut belt of the U.S. or in other countries. Introducing a new cultivar may mean change in the planting rate, adjusting the planter, harvester, dryer, cleaner, sheller, and method of marketing.

Peanuts are a rich source of protein (roughly 30 grams per cup after roasting) and monounsaturated fat. Recent research on peanuts and nuts in general has found anti-oxidants and other chemicals that may provide health benefits. Peanuts are a significant source of resveratrol, a chemical studied for potential anti-aging effects.
Because peanuts are considered an incomplete protein, containing relatively low amounts of the essential amino acids lysine, cystine, and methionine, it is advised to be sure that a diet or meal with peanuts as a staple also include complementary foods such as dairy or whole grain.
Peanuts are also an unbalanced source of fat because they are devoid of required Omega-3 fats.[4] Some brands of peanut butter are fortified with Omega-3 in the form of flaxseed oil to balance the ratio of Omega-3 to Omega-6.
Peanuts may be contaminated with the mold Aspergillus flavus which produces a carcinogenic substance called aflatoxin. While this substance quickly causes liver cancer in rats, humans are far more resistant. Lower quality specimens, particularly where mold is evident, are more likely to be contaminated. To minimise this problem, make sure to obtain your peanuts from a reputable source, and store the peanuts in a cool dry place such as the refrigerator or freezer.