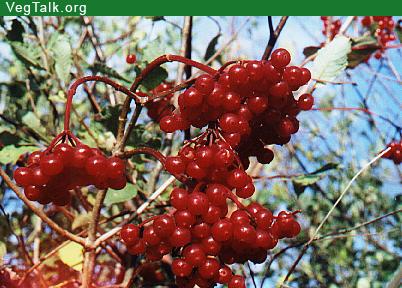 Viburnum opulus (Guelder-rose) is a species of Viburnum, native to Europe and Asia. Some botanists also treat the closely related North American species Viburnum trilobum as a variety of it (as Viburnum opulus var. americanum Ait.), or a subspecies, Viburnum opulus subsp. trilobum (Marshall) Clausen.
It is a deciduous shrub growing to 4-5 m tall. The leaves are opposite, three-lobed, 5-10 cm long and broad, with a rounded base and coarsely serrated margins; they are superficially similar to the leaves of some maples, most easily distinguished by their somewhat wrinkled surface with impressed leaf venation. The leaf buds are green, with are valvate bud scales.
The flowers are white, produced in corymbs 4-11 cm diameter at the top of the stems; each corymb comprises a ring of outer sterile flowers 1.5-2 cm diameter with conspicuous petals, surrounding a center of small (5 mm), fertile flowers; the flowers are produced in early summer, and pollinated by insects.

The fruit is a globose bright red drupe 7-10 mm diameter, containing a single seed. The seeds are dispersed when birds eat the fruit, then deposit the seeds in another location in their droppings.

Edible Parts: Fruit.
Fruit - raw or cooked. The fruit is up to 8.5mm in diameter but with a large seed. A sour taste, it is best cooked. The crushed fruit has an unpleasant smell. Used as a cranberry substitute in making, jellies, preserves etc. Some caution is advised, see notes on toxicity at top of the page.

Medicinal Uses
Antispasmodic; Astringent; Birthing aid; Homeopathy; Sedative.
Guelder rose is a powerful antispasmodic and is much used in the treatment of asthma, cramps and other conditions such as colic or painful menstruation. It is also used as a sedative remedy for nervous conditions. The bark is antispasmodic, astringent and sedative. The bark contains ‘scopoletin’, a coumarin that has a sedative affect on the uterus. A tea is used internally to relieve all types of spasms, including menstrual cramps, spasms after childbirth and threatened miscarriage. It is also used in the treatment of nervous complaints and debility. The bark is harvested in the autumn before the leaves change colour, or in the spring before the leaf buds open. It is dried for later use. The leaves and fruits are antiscorbutic, emetic and laxative. A homeopathic remedy is made from the fresh bark. It is used in the treatment of menstrual pain and spasms after childbirth.

Dye; Hedge; Ink; Wood.
A red dye is obtained from the fruit. An ink can be made from the dried berries. Plants can be grown as a tall hedge, they are rather bare in winter though. The wood can be used to make skewers.

It is commonly grown as an ornamental plant for its flowers and berries, growing best on moist, moderately alkaline soils, though tolerating most soil types well. Several cultivars have been selected, including ‘Snowball’ (“Snowball Tree”), which has all the flowers of the sterile type; it is more conspicuous in flower but does not produce any fruit.
The fruit is edible in small quantities, with a very acidic taste; it can be used to make jelly. It is however very mildly toxic, and may cause vomiting or diarrhoea if eaten in large amounts (Plants for a Future).
The dried bark is used in a tincture, known as “Cramp Bark,” to alleviate painful menstrual cramps.
It is naturalised in North America, where it has been misleadingly re-named as “European Cranberrybush” (it is not a cranberry).