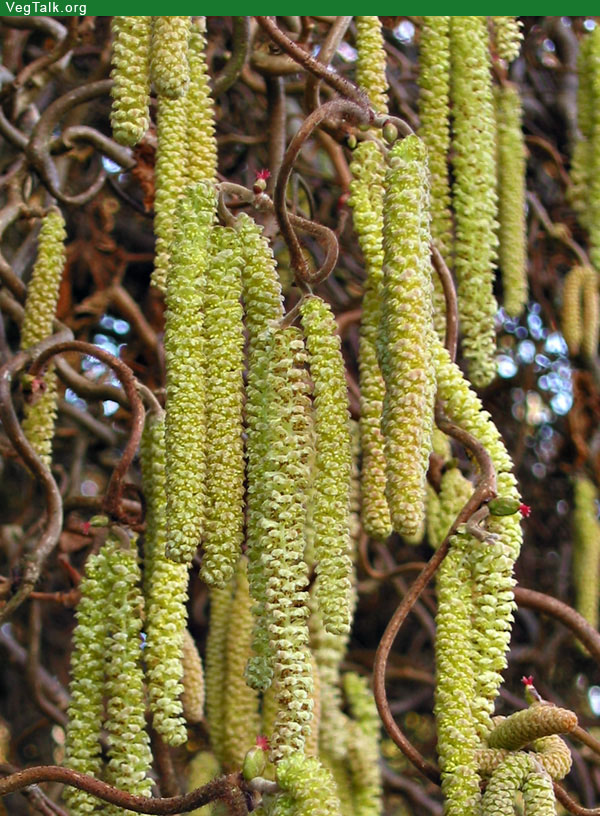 The Common Hazel (Corylus avellana) is a species of hazel native to Europe and Asia. It is typically a shrub reaching 3-8 m tall, but can reach 15 m on occasion. The leaves are deciduous, rounded, 6-12 cm long and across, softly hairy on both surfaces, and with a double-serrate margin.
The flowers are produced very early in spring before the leaves and are monoecious, with single-sex catkins, the male pale yellow and 5-12 cm long, the female very small and largely concealed in the buds, with only the bright red 1-3 mm long styles visible. The fruit is a nut, produced in clusters of one to five together, each nut held in a short leafy involucre (‘husk’) which encloses about three quarters of the nut. The nut is roughly spherical to oval, 15-25 mm long and 12-20 mm broad, yellow-brown with a pale scar at the base. The nut falls out of the involucre when ripe, about 7-8 months after pollination. It is readily distinguished from the closely related Filbert (Corylus maxima) by the short involucre; in the Filbert the nut is fully enclosed by a beak-like involucre longer than the nut.
Common Hazel is used by a number of species of Lepidoptera as a food plant.
The name of the species, avellana is derived from Avellino, a place in Italy.

The fruit is a nut, produced in clusters of one to five together, each nut held in a short leafy involucre (‘husk’) which encloses about three quarters of the nut. The nut is roughly spherical to oval, 15-25 mm long and 12-20 mm broad, yellow-brown with a pale scar at the base. The nut falls out of the involucre when ripe, about 7-8 months after pollination.

Edible Parts: Seed.
Edible Uses: Milk; Oil.
Seed - raw or roasted and used in breads, cakes, biscuits, sweets etc. An excellent nut for raw eating. They can also be liquidized and used as a plant milk. Rich in oil. The seed ripens in mid to late autumn and will probably need to be protected from squirrels. When kept in a cool place, and not shelled, the seed should store for at least 12 months. A clear yellow edible oil is obtained from the seed. It is used in salad dressings, baking etc.

Medicinal Uses
Anthelmintic; Astringent; Diaphoretic; Febrifuge; Nutritive; Stomachic; Tonic.
The bark, leaves, catkins and fruits are sometimes used medicinally. They are astringent, diaphoretic, febrifuge, nutritive and odontalgic. The seed is stomachic and tonic. The oil has a very gentle but constant and effective action in cases of infection with threadworm or pinworm in babies and young children.

Basketry; Charcoal; Cosmetic; Hedge; Miscellany; Oil; Plant support; Polish; Tannin; Wood.
The seed contains up to 65% of a non-drying oil, used in paints, cosmetics etc. The whole seed can be used to polish and oil wood. It is very easy to apply and produces a nice finish. The finely ground seeds are used as an ingredient of face masks in cosmetics. Plants can be grown as a tall hedge. They need to be left untrimmed or only lightly trimmed if seed is required. The bark and leaves are a source of tannin. Wood - soft, easy to split, not very durable, beautifully veined. Used for inlay work, small items of furniture, hurdles, wattles, basketry, pea sticks etc. The twigs are used as dowsing rods by water diviners. The wood also yields a good quality charcoal, used by artists.

Hazelnuts are extensively used in confectionery to make praline and also used in combination with chocolate for chocolate truffles and products such as Nutella. In the USA, hazelnut butter is being promoted as a more nutritious spread than its peanut butter counterpart, though it has a higher fat content. In Austria and especially in Vienna hazelnut paste is an important ingredient in the world famous torts (such as Viennese hazelnut tort) which are made there. Vodka-based Hazelnut liqueurs, such as Frangelico, are also increasing in popularity, especially in the U.S. and eastern Europe.
Hazelnut is popular as a coffee flavoring, especially in the form of Hazelnut latte. Hazelnut-flavored coffee seems (to many users) to be slightly sweetened and less acidic, even though the nut is low in natural saccharides. The reason for such perception is not yet understood, but might be due to synergistic interaction with components of coffee.