Chicory is the common name given to the flowering plants in genus Cichorium of the family Asteraceae. There are two cultivated species, and four to six wild species.

Common chicory (Cichorium intybus) is a bushy perennial herb with blue or lavender flowers. Originating from Europe, it was naturalized in North America, where it has become a common roadside plant. The roots are baked, ground, and used as a coffee substitute and additive in the plant’s Mediterranean region of origin, although its use as a coffee additive is still very popular in the American South, particularly in New Orleans. It is a staple in Cajun-style red-eye gravy. Common chicory is also known as blue sailors, succory, and coffeeweed. The plant is cultivated and used as endive under the common names radicchio, Belgian endive, French endive, or witloof. It is grown in complete darkness to keep new leaves tender and pale.

True endive (Cichorium endivia) is a species of chicory which is specially grown and used as a salad green. It has a slightly bitter taste and has been attributed with herbal properties. Curly endive and the broad-leafed escarole are true endives.

Cichorium is used as a food plant by the larvae of some Lepidoptera species including Setaceous Hebrew Character and Turnip Moth.

Root chicory (Cichorium intybus var. sativum) has been in cultivation in Europe as a coffee substitute for a long time. Around 1970 it was found that the root contains up to 20% inulin. Since then, new strains have been created, giving root chicory an inulin content comparable to that of sugar beet (around 600 dt/ha). Inulin is mainly present in the plant family Asteraceae as a storage carbohydrate (for example Jerusalem artichoke, dahlia, etc.). It is used as a sweetener in the food industry (with a sweetening power 30% higher than that of sucrose) and is sometimes added to yoghurts as a prebiotic. Inulin can be converted to fructose and glucose through hydrolysis.

Chicory, with sugar beet and rye was used as an ingredient of the East German Mischkaffee (mixed coffee), introduced during the ‘coffee crisis’ of 1976-9. Some beer brewers use roasted chicory to add flavor to their stouts.

Chicory’s leaves are still used today in typical Roman recipes: it’s common in Roman restaurants to eat dishes with boiled chicory leaves, olive oil and lemon juice (fried with garlic and red pepper). The plant is very common in the Roman countryside and is often picked by farmers; recently greengrocers introduced a cultivated variety of the plant, which is bigger and has longer leaves.

Some images of Chicory 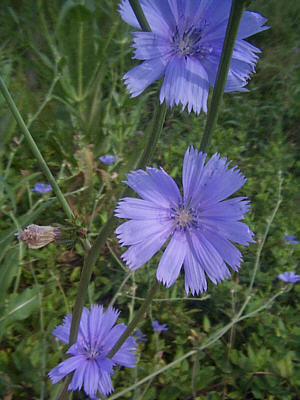